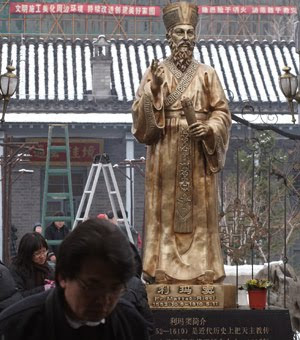 A new Vatican exhibit highlights the life of a Jesuit missionary whose extraordinary intelligence, culture and open-mindedness helped him bring Christianity to imperial China four centuries ago.

The exhibit is part of a series of events marking the 400th anniversary of the death of Father Matteo Ricci, an Italian Jesuit who spent 28 years evangelizing, absorbing Chinese culture and bringing Western science to the faraway Asian continent.

The show, which was to open Oct. 30 in the Braccio di Carlo Magno hall in St. Peter's Square, is titled "On the Crest of History, Father Matteo Ricci (1552-1610): Between Rome and Peking" (the name formerly used for the Chinese capital Beijing).

It was Father Ricci's scientific acumen and enthusiasm for cultural exchange that won the trust and admiration of the Ming Dynasty Emperor Wanli. The relationship ensured that he and his Jesuit brothers would have the freedom to evangelize, the show's organizers explained in a news conference at the Vatican Oct. 28.

A proficient cartographer, Father Ricci was perhaps most appreciated for the maps of the world he made for the Chinese, who at the time had little knowledge of the other continents, said Antonio Paolucci, director of the Vatican Museums and head curator of the exhibit.

The maps Father Ricci drew, as well as many of the European scientific instruments he brought to amaze and share with his Chinese hosts, are among the many items on view in the show.

"Matteo Ricci went to China and seduced the Chinese, offering himself as a man of science: a cartographer, an astronomer, a mathematician," and by bringing instruments like astrolabes and mechanized clocks, Paolucci said.

"He was honored and admired," immersing himself so much in Chinese culture that "he became more Chinese than the Chinese," Paolucci said.

Father Ricci also translated many works, including a Catholic catechism into Chinese and the teachings of Confucius into Portuguese, which Paolucci explained was the lingua franca of the time.

Born in 1552 in Macerata, in central Italy, Matteo Ricci entered the Jesuit order in 1571. After years of study, he sailed to India, where he was ordained in 1580.

After first traveling to Macao, in 1582 he and another priest established a Jesuit residence in Zhaoqing, a city in the Guangdong province. The order encountered difficulties and hostility over the next few years, but Father Ricci was instrumental in eventually opening more residences for Jesuit missionaries.

In 1601, after overcoming many obstacles, he arrived in Beijing, where he was admired and befriended by the elite of the city. There he stayed until his death at 58. The emperor made an unheard-of concession, allowing Father Ricci, a foreigner, to be buried in Beijing.

Bishop Claudio Giuliodori of Macerata said that Father Ricci's "extraordinary missionary adventure brought him to build, for the first time in history, a true bridge of dialogue and exchange between Europe and China."

In a message to the Diocese of Macerata inaugurating the anniversary celebrations, Pope Benedict XVI wrote that it was Father Ricci's great respect for Chinese traditions that "distinguished his mission to search for harmony between the noble and millenary Chinese civilization with the Christian novelty."

The exhibit is divided into two parts. The first section highlights the Jesuit order and scientific knowledge of the time; it includes an immense painting from 1619 of St. Ignatius of Loyola, the founder of the Jesuits, by Peter Paul Rubens and scientific instruments from the 16th and 17th centuries, including astrolabes, telescopes, early mechanical clocks, and Ptolemaic and Copernican models of the earth.

The second part of the exhibit is dedicated to Father Ricci's stay in China; it includes displays of his translations and examples of documents he wrote in Chinese, Portuguese and Italian; Chinese tapestries; 17th- and 18th-century Chinese statuary; and a colorful early-20th-century altar honoring Confucius that belongs to the Vatican Museums.