Listecki said to be a finalist for Milwaukee archbishop position 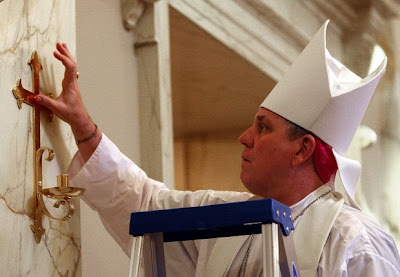 Diocese of La Crosse Bishop Jerome Listecki may be a finalist to head the Archdiocese of Milwaukee.

Rocco Palmo - a former correspondent for the Roman Catholic weekly The Tablet, with connections to the Vatican hierarchy - included Listecki on a short list of likely candidates for Milwaukee archbishop that he posted online.

The La Crosse diocese did not return phone calls on the matter Tuesday.

Julie Wolf, director of communications for the Milwaukee archdiocese, also had no information, saying the choice rests with Pope Benedict XVI.

The highest post in the Milwaukee archdiocese has been vacant since April 15, when Timothy M. Dolan was installed as archbishop of New York, she said.

"Like everyone else, we are waiting for the Holy Father to make the announcement," she said.

Callahan has been acting administrator of the Milwaukee archdiocese since Dolan's departure, according to the Arizona Daily Star in Tucson.

Palmo has served as a church analyst for various national and international media. He correctly predicted in May 2006 the Pope would appoint Bishop Donald W. Wuerl of Pittsburgh as the next archbishop of Washington, D.C., according to the New York Times.

Listecki, installed as the ninth bishop of the Diocese of La Crosse in March 2005, is a native of Chicago. He was appointed pastor of St. Ignatius Parish in Chicago in 2000 and later that year was named auxiliary bishop for the archdiocese.