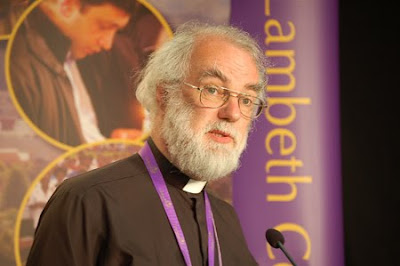 Faith leaders have issued a first of its kind statement on climate change in which they recognise “unequivocally that there is a moral imperative to tackle the causes of global warming”.

The statement was issued following a historic meeting between faith leaders at the official residence of the Archbishop of Canterbury, Lambeth Palace, on Thursday.

It says that faith communities have a “crucial” role to play “in pressing for changes in behaviour at every level of society and in every economic sector”.

“We all have a responsibility to learn how to live and develop sustainably in a world of finite resources,” say the leaders, who represent the world’s major faiths.

“As leaders and representatives of faith communities and faith-based organisations in the UK we wish to highlight the very real threat to the world's poor, and to our fragile creation, from the threat of catastrophic climate change.”

They continue: “The developed world is primarily responsible for the already visible effects of global heating. Justice requires that we now take responsibility for slowing the rise in global temperature.

“We call upon UK negotiators at Copenhagen, and the other nations of the G20 in particular, to fight for a deal which speedily ends unsustainable reliance on fossil fuels and puts in place urgent measures to reduce greenhouse gas emissions so that global temperature rise may be kept within two degrees centigrade.”

The meeting was hosted by the Archbishop to discuss the response of faith communities to the environmental crisis and marked the 40-day countdown to the start of the Copenhagen Climate Change Summit.

The faith leaders pledged to work together to raise awareness of the effects of climate change on the world’s poor and to take the necessary action to reduce their carbon emissions and promote sustainable practices.

They called on the UK and other G20 governments to push for an ambitious climate deal in Copenhagen that would commit countries to efforts towards keeping global temperature rises below two degrees centigrade.

“We all have to do more to face the challenges of climate change,” said Dr Williams. “Faith communities have a crucial role to play.

“We must do our bit and encourage others to do theirs. Together we can and we will make a difference.”

The statement was welcomed by the Secretary of State Ed Miliband, who said tackling climate change was “a cause that unites people of all faiths”.

“Each generation holds the planet in trust for the next and to fulfil our obligations to these future generations, we must succeed in getting a fair and ambitious agreement,” he said.

“We need the voice of all the world’s religions in the coming weeks as we approach the Copenhagen summit.”

The Church of England will launch its seven-year ‘Church and Earth’ climate change action plan at a gathering of faith leaders next week. Church and Earth is one of nine-long term plans drawn up by the world’s major faiths to be discussed at the Windsor Conference, attended by UN secretary-general Ban Ki-Moon.