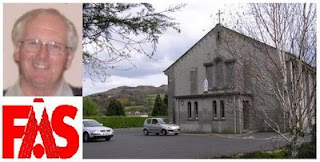 FAS seem to be overloaded with manpower in the ranks so why when something serious like this happens did they leave it to the Sponsor to deal with as he saw fit. The girls on the scheme still had to work in the same small room as this man for a further 2 years AND HE REMAINED A FAS SUPERVISOR!!!

Would you like your twenty something daughter to be stuck in a room with a flirty old man of 65 and she in early 20's as most of the girls on the particular FAS scheme were? Where was the FAS concern for these girls?

Because the Sponsor was a Priest did they leave it up to him to do the right thing but of course he did not - he was thinking maybe the cash cow will end if he did the right thing.

All the talk that went on in the scheme at that time was EXPANDING outside the actual Church premises and SUPPLYING staff to other places around Bray and Enniskerry that needed CE staff. They are STILL doing it to this day.l For each BODY comes some extra profit or commission for the Church (it was almost like being a pimp thinking of the money not the girls or men on the scheme).

They have informed us from Waterford Office in charge of East Coast schemes that they were NOT invited to sit in on the interviews!!!! She was a part time sports teacher and supermarket shop employee prior to her new big managerial job BUT SHE IS A PERSONAL FRIEND OF THE PARISH PRIEST.

JOBS FOR THE GIRLS!!! (Helps too when your husband is a retired Sergeant).

It looks like she also MANAGES the Parish Centre which is a conflict of interests according to the previous Supervisor who said he was NOT meant to double job and he was there to run the FAS scheme and not be responsible for the Parish Centre but he did BOTH and of course that meant healthy personal expenses.

Sponsor abused rules by using FAS CE girls for 7 months to do the job of a full time permanent employee when she was unfairly dismissed which meant once there was a bum in her seat the full time person was not required to come back.

This was not staff training for the girls dumped into her job and FAS said so and eventually made the Parish Priest take their staff out of the job but he abused his power and the FAS scheme in the meantime.

With all the blatant misdemeanours why is the scheme left at the Church????????

There are 3 other Churches and Parishes in the town that could do a better job of managing this scheme why is it not transferred?