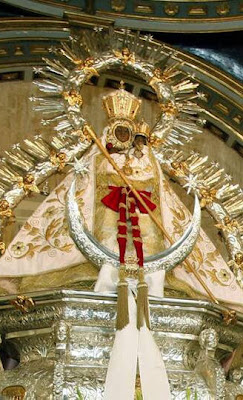 Benedict XVI has conferred a papal decoration on a devotion to Mary as she is revered in the Diocese of Jaen.

The Pope has given the Golden Rose to the "Virgen de la Cabeza" (literally, Virgin of the Head), the patron of the diocese.

This is the first Marian image in Spain to receive the now uncommon honor.

Last Wednesday at a press conference, Bishop Ramón del Hoyo of Jaen displayed the Golden Rose -- a golden rosebush complete with leaves and flowers in a Renaissance silver vase decorated with the papal coat of arms.

The inscription in Latin says: "Benedict XVI. Golden Rose. For the image of the Blessed Virgen de la Cabeza, Heavenly Patroness of the Diocese of Jaen. Most gracious concession. November 22, 2009."

The bishop of Jaen requested the Golden Rose from the Pope on the occasion of the Jubilee Year being observed in the diocese in honor of its patroness on the centenary of her coronation.

In making the request, Bishop del Hoyo noted that the oldest pilgrimage in Spain is held in her honor and that thousands of faithful profess their devotion to her.

The Golden Rose is a papal decoration conferred on prominent Catholic personalities; it has gone through a significant evolution.

Initially, kings and dignitaries received it, later it was conferred almost exclusively on queens and, more recently, on Our Lady. The distinction was created by Pope Leo IX in 1049.