Pope: "a natural friendship" between faith and reason when they seek the truth 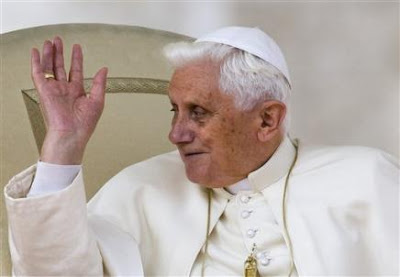 Between faith and reason "there is a natural friendship," they "are filled with joy when they are both animated by the search of the intimate love of God" and, as John Paul II wrote they are "the wings on which the human spirit rises up to God ".

This was the lesson proposed today by Benedict XVI to the 15 thousand people in St. Peter's Square for the general audience.

A lesson which spoke of "the history of the flourishing of Latin theology in the twelfth century".

At that time, he recalled, Western Europe lived "a period of relative peace, economic development and structural consolidation as well as a vibrant cultural life thanks to relations with the East".

The Church was witnessing the fruits of Gregorian reform, which "established evangelical purity particularly in the clergy and restored wide freedom of action to the papacy".

It was also a period of "development of consecrated life with the birth of new orders and the revival of existing ones." "Theology also flourished, refining methods, advancing towards new problems, in contemplation of the mystery of God," "inspiring arts and culture."

The two different environments in which this fervid theological activity flourished were monasteries and scholae [schools] that "would soon gave birth to universities, which are one of the typical inventions of medieval Christianity".

Thus there came to exist monastic and scholastic theology. The former was mainly due to "abbots gifted with evangelical fervour, dedicated to inspire and nurture the desire for God," the latter to "educated men, fond of research, aiming to show the merits of the mysteries of God, with faith certainly but with also with reason".

In the monasteries the method was primarily linked to the explanation of Holy Scripture. "The monks were all devoted listeners and readers of Scripture," which became "lectio divina, an orated reading of the Bible. Simple reading is not enough to perceive its profound mystery, its message. They needed a spiritual reading of the Bible, allegorically interpreted to discover Christ and his saving work in every page".

The Pope recalled that "the Synod on the Word of God last year recalled the importance of spiritual reading of Scripture" and commented that "it must be built on the monastic theology." "Conscious that a purely theoretical, profane, reading is not enough to get into the heart of the Holy scriptures the Bible should be read with the spirit in which it was written".

The pope cited in this respect a scholar of the seventeenth century, Jean LeClerc, and his an essay entitled " L’amour des lettres e le desir de Dieu”.

It is “desire to know and love God, who comes to us with His word, that must be accepted, practised and meditated upon”, an intimate prayerful attitude that must precede, accompany and complement the study of Sacred Scripture. Ultimately, monastic theology is listening to the word of God".

"It is an invitation for us to nourish our existence with the Word, even by listening more carefully to the words of the Gospel during Sunday Mass and by devoting a little time every day to the Word of God."

Scholastic theology, however, was formed "around a master and his disciples, to train professionals of culture in an era in which knowledge was increasingly appreciated."

The method involves the placement of a "quaestio", a question around which " the discussion between teacher and students revolved". Debate "aims to achieve a synthesis for a deeper understanding of the Word of God."

St. Bonaventure said that "thus it creates a deeper personal, concrete faith in the life of man”.

The conclusions drawn from such debate "began to build a system of theology, of ever-expanding synthesis".

"And this is how the so-called 'summa' were born from the comparison between human reason and the Word of God". "The scholastic method gives confidence to human reason, grammar, philology and above all logic are at the service of knowledge of God. Still today they affect order, clarity, the logical sequence of argument" of academics.

And "echoing the invitation of the First Epistle of Peter scholastic theology invites us to be always ready to answer whoever asks the reason for the hope that is in us".

It "reminds us that between faith and reason there is a natural friendship, founded in creation itself." John Paul II wrote that "faith and reason are the wings on which the human spirit rises up to God".