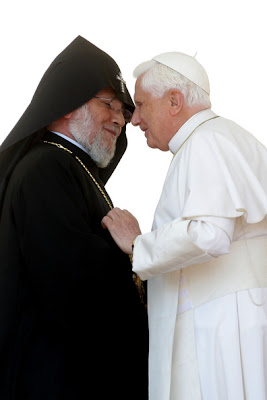 Pope Benedict XVI marked the tenth anniversary of the election and enthronement of Karekin II, the Supreme Patriarch of the Armenian Apostolic Church, by sending a message to him today.

The Pope told the Patriarch that he hopes the good relations between the two Churches would “continue to grow in the years ahead.”

Noting that the “recovery of freedom for the Church in Armenia towards the end of the last century brought joy to Christians throughout the world,” Benedict XVI congratulated the Patriarch on his efforts as leader of the Armenian Apostolic Church over the last decade.

In the Pope's words, Karekin II's work has been “remarkable,” an assessment that he went on to spell out in his message.

The Pontiff praised “the flourishing of new initiatives for the Christian education of the young, for the training of clergy, the creation of new parishes, the building of new churches and community centers, as well as the promotion of Christian values in the social and cultural life of the nation."