Music from the Vatican - historic free concert at Westminster Cathedral 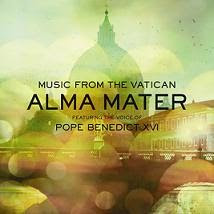 An historic free concert will be held at Westminster Cathedral on Wednesday 2 December featuring the very first live UK performance of music from ‘Alma Mater - Music From the Vatican’ the album featuring the voice of Pope Benedict XVI.

The concert will officially launch the album released worldwide by Geffen/Universal on Sunday 29 November.

This special one-off concert will have performances by the Chamber Choir of the Philharmonic Academy of Rome, the first time this historic choir has performed in the UK, and the Royal Philharmonic Orchestra.

There will also be appearances from special guests to be announced at a later date.

Fr Giulio Neroni, who devised the concept for the album said: “For me the concert is very important as it brings the album to life and helps to illuminate the importance of the Pope’s visits to the Marian sanctuaries – featured on the album.”

Msgr Pablo Colino said: “The choir and I are very much looking forward to making our debut performance in the UK, in the famous Westminster Cathedral. We are proud to be part of the Alma Mater project. As the longest serving member of the Vatican I can say with certainty that Pope Ratzinger has a wonderful musicality. I have known six Popes and none could sing as well as him or were as musically aware as he is: this will be evident when people listen to the album.”

Vincent Messina, producer of Alma Mater the album, and organiser of the concert, said: “We are delighted to be able to bring the album to life with this great concert and in such a historic cathedral.

UK music fans have the opportunity to experience the purity and beauty of the Gregorian melodies performed by this fantastic choir and conducted by the indefatigable Pablo Colino, the acknowledged number one leading arranger and director of Gregorian music and for 50 years now, working in St Peter’s.”

Canon Christopher Tuckwell, the Administrator of Westminster Cathedral said: “I am very pleased to welcome The Chamber Choir of the Philharmonic Academy of Rome who will join with the voice of the Holy Father in this Concert here at Westminster Cathedral and am delighted to have the opportunity of hosting this event.”