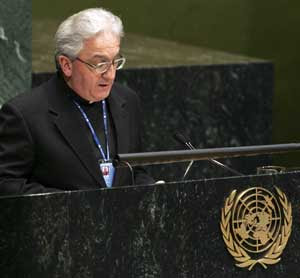 He called for the revision or repeal of anti-blasphemy laws, saying their abuse aids such discrimination.

“There is unfortunately no religion on the planet which is free from discrimination. Acts of intolerance, and violations of religious freedom, continue to be perpetrated in many forms,” he commented.

“Christians are the religious group most discriminated against as there may well be more than 200 million of them, of different confessions, who are in situations of difficulty because of legal and cultural structures that lead to their discrimination.”

Archbishop Migliore reported that in recent months Christian communities in some Asian and Middle Eastern countries have been attacked, leaving many injured and others killed. Their churches and homes were also burned down.

“Such actions were committed by extremists in response to accusations against individuals, perceived –according to anti-blasphemy laws– as being in some way disrespectful of the beliefs of others,” he continued. “In this context, my delegation welcomes and supports the promise of the government of Pakistan to review and amend such laws.”

The archbishop said that blasphemy laws have provided opportunities for extremists to persecute those of different faiths.

“Such laws have been used to foster injustice, sectarian violence and violence between religions,” he added, calling for the repeal of laws that serve as “instruments of abuse.”

“Legislation which restricts freedom of expression cannot change attitudes. Instead, what is needed is the will to change,” he advised.

He claimed that change would come by raising individuals’ consciousness and bringing them to a greater understanding of the need to respect others regardless of their faith or cultural background.

“Cooperation among religions is a prerequisite for the transformation of society and must lead to a change of minds and hearts so that a culture of tolerance and peaceful coexistence among peoples can truly be built,” Archbishop Migliore’s address concluded, noting that the foundational instruments of the U.N. are key to advancing human rights.
+++++++++++++++++++++++++++++++++++++++++++++
Disclaimer