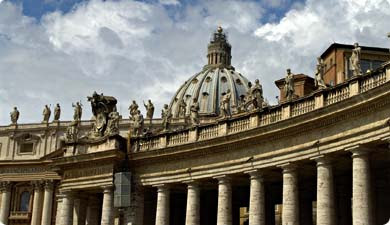 An understanding of the nature of the ordained priesthood vs. that of the priesthood of believers needs to be rooted in sound Trinitarian doctrine, an American theologian told Canada's Catholic bishops.

"At the heart of Trinitarian doctrine is our conviction that God is not an autonomous monad," said University of Toledo theology professor Richard Gaillardetz to the plenary of the Canadian Conference of Catholic Bishops (CCCB) Oct. 19.

"God is not another individual, something in the cosmos, simply bigger and more powerful than ourselves."

"As I tell my students, God is not Zeus! Rather, for Christians, the divine being is constituted by personhood, a threefold being-in-relationship. The Trinitarian persons are not autonomous individualities but subsistent relations."

The CCCB invited Gaillardetz to give two reflections to mark the Year for Priests. On Oct. 19, he focused on the impact of the Second Vatican Council on an understanding of the priesthood, and on Oct. 20, he examined the relationship of the priest to the priesthood of believers.

Prior to Vatican II, a "neo-scholastic view" prevailed that saw the priest as "an autonomous individual who was ontologically changed in his interior being by the conferral of a distinctive sacramental character," he said.

In reaction to that view, after the council the priest was more likely to be defined in terms of function - what he does, he said. But that view has also come under critique.

These two views, which seem to be in conflict, can be resolved by putting them in a relational context, he said. "If the divine being is thoroughly relational, then it follows that created reality must, at least in the divine intention, be relational as well."

Ordination does "effect an ontological change," he said, but not in an "isolated individual." Understood relationally, the ordinand is "reconfigured at the level of his very being in his relationship to Christ and within the life of the Church."

Gaillardetz told the 90 bishops they face a challenge in encouraging a fraternal relationship among their priests and with themselves.

He advised them to make sure priests "do not succumb to an isolated, individualistic" or "Lone Ranger" concept of ministry.

There is a legitimate concern, he said, about whether the growth of lay ministry and the permanent diaconate poses a threat to the unique ministry of the priest, though he thinks the anxiousness is "overdrawn."

Nevertheless, he said the Church must do everything she can to encourage vocations to the priesthood.

"We must find candidates who are not threatened by the gifts and ministries of the baptized," he said.

The priest needs to promote the baptismal gifts and use his pastoral authority to "properly order them" for the Church's mission.

"One priest who is willing to get to know his people, discern their gifts and abilities, may be more pastorally effective than five priests who can validly perform the sacraments but are unable to inspire and empower the baptized," he said.

Gaillardetz stressed the "priesthood of the faithful" is not synonymous with a "lay priesthood.

"This is a dangerous misunderstanding," he said. This view puts people into two camps and becomes a "recipe for an adversarial understanding of the relationship between the clergy and laity."

"All Christians, lay and clergy, share in the common priesthood of the baptized," he said.

"All Christians, in other words, are called to make of their lives a sacrifice 'holy and pleasing to God.'"

Though the distinction between priest and the laity is real, "it should not be treated as a separation," because the priest, though ordained, does not cease to be a member of the people of God, he said.

An understanding of the nature of Christ's sacrifice is key, he said.

"In the Christian conception, Jesus was not offered as victim by another in order to appease or pacify God," he said.

"Jesus was the one who freely offers himself as the innocent victim of a violent action that is not perpetrated on him by God but by a sinful humanity."

The "radical shape" of the "one sacrifice of Christ" is "incomprehensible apart from the resurrection," he said.

"For Christians there is only one sacrifice and in a primordial sense, there can be only one priesthood, the priesthood of Christ who offers himself as a vulnerable, forgiving victim for the salvation of the world."

Gaillardetz told an anecdote about a newly-ordained priest fretting over his priestly identity.

A retired priest responded to him saying, "Quit spending so much time worrying about your priestly identity and go visit the sick."