Anglican provision is a response to those ‘knocking at the door,’ former Westminster archbishop says 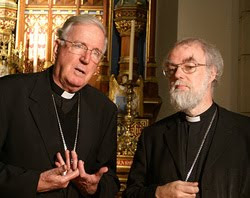 The Archbishop Emeritus of Westminster Cormac Murphy-O’Connor has issued an extended commentary on Pope Benedict XVI’s new provision for Anglicans who wish to become Catholic.

He reported that a similar proposal had been rejected under Pope John Paul II, but was revived after the “repeated requests” from Anglicans worldwide who have been “knocking at the door for a long time.”

He emphasized that Pope Benedict’s response to those Anglicans who wanted to become Catholic was not a reflection on the Anglican communion as a whole or of Catholics’ ongoing ecumenical relationship with them.

Cardinal Murphy-O’Connor’s comments came during the Richard Stewart Memorial Lecture, delivered at Worth Abbey on Oct. 29. The cardinal was joined at the lecture by the Bishop Kieran Conry of Arundel and Brighton and the Abbot of Worth, Christopher Jamison.

The cardinal, who was the Catholic Co-Chairman of the Anglican/Roman Catholic International Commission (ARCIC), titled his lecture “ARCIC: Dead in the Water or Money in the Bank.”

He recounted his own work in ecumenism from an autobiographical point of view while discussing theological dialogue, the search for communion, and “spiritual ecumenism.”

He also discussed the recent Anglican provision, reporting that a special provision for Anglicans might have been “helpful” in 1993 and 1994 when other groups of Anglicans joined the Catholic Church.

However, this proposal was rejected as inappropriate because the bishops of England and Wales were dealing solely with clergy of the Church of England and a provision would have to be provided to all the churches of the Anglican Communion.

“If the Holy See had offered such Personal Ordinariates then, and in particular here in England, it might well have been seen as an un-ecumenical approach by the Holy See, as if wanting to put out the net as far as one could,” Cardinal Murphy-O’Connor opined.

He said that both Pope John Paul II and then-Cardinal Joseph Ratzinger would have been against such a proposal, as were the leading Catholic prelates of Britain.

“Matters have moved on since then and the repeated requests by many Anglicans, not only from England but from other Provinces of the Anglican Communion, have necessitated a new approach, which is why I think that the Personal Ordinariates offered by the Holy Father can be seen not in any way un-ecumenical but rather as a generous response to people who have been knocking at the door for a long time.”

His other lecture remarks discussed his early interaction with Anglicans, Congregationalists and Methodists. Cardinal Murphy-O’Connor told how he became “imbued” with what the Second Vatican Council said about the “important work” of ecumenism in its document on the topic, “Unitatis Redintegratio.”

“While it stated quite clearly that the unity of the Church subsists in the Catholic Church as something she can never lose, it insisted that the Church must also pray and work to maintain, reinforce and protect the unity that Christ wills for her,” he explained.

Prayer in common with other Christians was “crucially important” because a change of heart and holiness of life should be regarded as the “soul” of the ecumenical movement, he said.

Turning to the “fruitful yet so inconclusive” aspects of ARCIC, he said: “In more than 40 years of official ecumenical dialogue with the Anglican Communion, it may be asked, ‘Where are we?’”

Some of the classic disputes at the root of divisions between Anglicans and Catholics, the cardinal stated, had been “basically resolved” through a new consensus on fundamental doctrine. While there is a “renewed understanding,” he said work remains on the relationship of Scripture and Tradition and the teaching authority which interprets it.

Cardinal Murphy-O'Connor also touched on the subject of the Anglican Communion’s decision to ordain women to the priesthood and the episcopate, a action that he said created a “Very difficult obstacle.”

However, in his view the ARCIC documents are still “money in the bank” because they are an achieved consensus and a study and reflection on a “renewed vision” of Christ’s Church.

The Second Vatican Council’s teaching that the Church of Jesus Christ “subsists in” the Roman Catholic Church takes seriously that there are individual Christians, ecclesial elements, and in the case of the Orthodox even “genuinely particular churches” outside the “visible confines” of the Catholic Church

This teaching means that full communion, as the goal of ecumenism, “has not to be understood as simply a return of separated brothers and sisters and churches to the bosom of Catholic mother church.”

“This full communion, unity, does not of course mean uniformity but unity within diversity and diversity within unity,” he added.