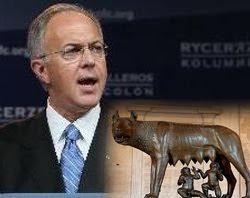 Supreme Knight of Columbus Carl A. Anderson on Wednesday will receive the city of Rome’s Lupa Capitolina (The Wolf of the Capital) award in honor of the nearly 90 years of service of the Knights in Rome.

Anderson will receive the award from Rome mayor Gianni Alemanno on Wednesday evening on the Campidoglio, one of the Seven Hills of Rome.

“As both the 'eternal city' and the center of the Catholic Church, Rome has a special place in the hearts of the Knights of Columbus, and we look forward to another 90 years of service in this great city.”

In 1920 a delegation of Knights led by then-Supreme Knight James Flaherty met with Pope Benedict XV. The Pope asked the Knights to expand their work in Rome.

During the 1920s the Knights opened several sports facilities for the free use of the youth of Rome. Another facility opened in the 1950s. The Knights continue to operate four of these facilities, which are regularly used by Roman youth.

The Knights also donated a new shortwave radio transmitter to the Vatican in 1966 and presently pay for the costs of a satellite uplink for major worldwide telecasts from the Vatican.

In the 1980s the Knights funded construction on several chapels and sponsored the restoration of the façade of St. Peter’s Basilica.

In the 1990s the Knights provided financial support for the repair of the roof and restoration of the mosaics in St. Peter’s Blessed Sacrament Chapel, as well as the restoration of the Maderno Atrium and its massive bronze doors in preparation for the Jubilee 2000 celebration.

In the last decade the Knights have sponsored several academic conferences and other efforts in restoration work.

The order also sponsored the Concert for Reconciliation between Christian, Jewish and Muslim faiths, held in the Vatican in 2004 in the presence of Pope John Paul II.

The Lupa Capitolina award is named for the wolf that suckled the legendary founding brothers of Rome, Romulus and Remus.

The award is a miniature version of a famous statue of the wolf nursing the two infant brothers.