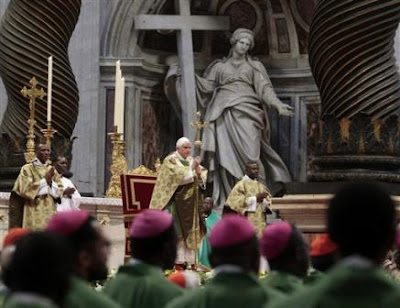 The Second Special Assembly for Africa of the Synod of Bishops closed yesterday after meeting almost continuously since October 4 to discuss the future of the Church in Africa.

The Synod for Africa concluded on Saturday with Pope Benedict being presented the 57 propositions drawn up and approved by the Synod Fathers.

Pope Benedict offered his observations of the proceedings, saying, “the temptation could have been to politicize the theme, to speak less as pastors and more as politicians, and thus in a sphere which is not our own.”

Despite the “strong political implications” of the subject matter considered by the gathering, the Holy Father returned to his remarks at the opening of the synod, when he said that “reconciliation, justice and peace are not possible without a profound purification of the heart, without a renewal of the mind, a 'metanoia,' without the newness that arises from the meeting with God.”

To conclude the Synod for Africa, the Synod Fathers voted on a number of propositions, using the answers “placet” or “non placet,” which is Latin for “it pleases” or “it does not please.”

The prelates selected 57 propositions to present to the Holy Father, from which he will prepare the final document on the assembly.

The propositions touched on many topics including “greater ecclesial communion at all levels, encouraging cooperation within the Church,” as well as an appeal to all those who are at war in Africa: “stop the hostilities and be reconciled!”

Another theme that was frequently discussed was the environment. Observing that there was “an irresponsible degradation and senseless destruction of the earth, which is 'our mother,'” the Synod Fathers noted that “some businesses, governments and multinational and trans-national companies engage in business that pollute the environment, destroy flora and fauna, thus causing unprecedented erosion and desertification of large areas of arable land... in complicity with those who exercise political and economic leadership in Africa.”

The bishops also raised their voices on the issues that impact women. They rejected abortion and so-called reproductive health rights of women, calling instead for the defense of the family and of human life.

Additionally, they condemned “all acts of violence against women, such as the battering of wives, the disinheritance of daughters, the oppression of widows in the name of tradition, forced marriages, female genital mutilation, trafficking in women and several other abuses such as sex slavery and sex tourism.”

The Synod Fathers proposed that the Pope consider the “fifteen million migrants who are looking for an homeland and a place of peace,” called for the abolition of the death penalty, and asked that AIDS victims in Africa “receive the same quality of treatment as in Europe.”

Finally, the prelates emphasized the importance of “the professional training and ethical formation of journalists to promote a culture of dialogue which avoids division, sensationalism, disinformation and the offensive trivialization of human suffering, all of which could harm the harmony and peace of societies and communities.”