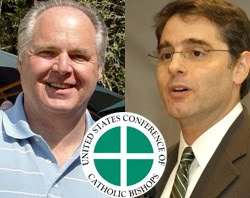 The Department of Communications of the U.S. Conference of Catholic Bishops has said it did not join a petition to the FCC which called for discussion over “hate speech” and its alleged role in violence.

Some critics of the petition have cast it as an effort to shut down radio show hosts like Rush Limbaugh.

The Department of Communications told CNA on Monday that they had sent their own letter noting the “serious constitutional and regulatory problems” associated with regulating alleged hate speech.

The So We Might See Coalition, of which the U.S. Conference of Catholic Bishops’ (USCCB) Department of Communications is a member, had organized a letter to Federal Communications Commission Chairman Julius Genachowski.

The letter and its related petition asked the FCC to open a “notice of inquiry into hate speech in the media” and to update a 1993 report on the role of telecommunications in hate crimes.

The coalition said it is concerned about the possible connection between “hate speech” and violent crimes. It commented that immigrant, minority and religious segments of the population are often targeted by hate speech before being targeted by physical hate crimes.

The letter noted a June 2006 incident in which four teenagers posed as federal agents and asked two Mexican men for their green cards.

The teens then beat and robbed the two men, accusing them of stealing jobs from U.S. citizens.

The coalition letter then noted that the incident occurred after radio talk show host Rush Limbaugh called Mexican immigrants a “renegade, potential crime element that is unwilling to work.”

The letter did not indicate any connections between the teens and Limbaugh.

It warned that hate crimes against Hispanics have been increasing, claiming that electronic media have a strong influence on children and teenagers because they are not yet fully developed cognitively.

In a Monday e-mail to CNA, Secretary Helen Osman of the USCCB’s Department of Communications said that although the USCCB is one of the groups in the So We Might See coalition, the USCCB did not join the petition.

“USCCB shares So We Might See's general commitments to improving access to broadband among the under-served; to reducing violence in all media; and to reducing the excess of advertising in children's programming.

But USCCB does not join in every action of the group, as in the case of this petition.

“In any event, we are certainly not participating in any campaign to censor any news organization, program or commentator,” she added.

Osman provided CNA with the USCCB’s own letter to the FCC to open an inquiry into hate speech. Such a notice does not result in any new regulations or action by the FCC, she pointed out.

“One reason we are eager to see the inquiry opened is that it will present an occasion to alert the FCC to the serious constitutional and regulatory problems associated with regulating hate speech,” Osman explained.

The USCCB’s July 29 letter to the FCC, signed by Osman, noted the “difficult constitutional and regulatory questions” raised by potential action against hate speech.

In the USCCB’s view, a forum opened by an FCC Notice of Inquiry would help discuss questions such as:

“Depending on the definition of hate speech, would expressions of religious teachings be deemed hate speech? For example, would Roman Catholic teachings on marriage or homosexuality be deemed hate speech by some gay rights advocates? Similarly, some religions may deem the religious beliefs of others to be hateful, but when, if ever, should that characterization bear legal significance?”

The USCCB expressed support for “a broad public forum” in which to debate such issues in “a respectful manner.”