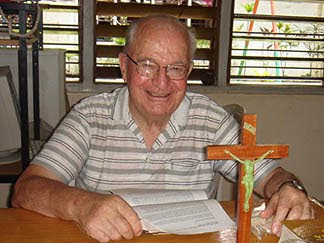 Military intelligence and separatist Islamic group sources have confirmed that Sinnott, 79, is still alive, according to reports in local media.

But he is suffering from malnutrition and dysentery, the unnamed sources have said.

His condition is critical and he requires medication because of the heart operation, a report in The Philippine Star noted.

Authorities are having little success in locating the priest, a native of Wexford, Ireland, who was ordained in 1954 with the Missionary Society of St. Columban, an order that has been working in the Philippines since 1929.

The Columbans have trained many Filipino priests who in turn have gone out on missionary work to other countries, according to the society's Web site.

Sinnott was taking a walk in his garden on Oct. 11 when men stormed his residence near the southern city of Pagadian on Mindanao Island. Witnesses said he was hustled into a waiting van that later was found abandoned along the coast.

Police have since been combing the area and are appealing for information from all communities and especially from teachers, local officials and even separatist Islamic groups.

Suspicion has fallen on the Islamic militant Abu Sayyaf group, which has been blamed for previous kidnappings for ransom. Abu Sayyaf in translation meaning Sword of God; the group is classified as a terrorist organization by the U.S. Department of State.

Another separatist group, the Moro Islamic Liberation Front, was quick to denounce the kidnapping. Last week its head, Murad Ebrahim, ordered his forces in the area to "arrest" the kidnappers if they were found.

Father "Mick" Sinnott's kidnapping is a politically sensitive issue for many militant groups hoping for better relations with government authorities. The priest is well-liked by people of all religious persuasions and has been working with handicapped children for most of his more than 40 years in the Philippines.

An outdoor rally was held in Pagadian last weekend and attended by around 800 people demanding Sinnott's release, according to the local newspaper Sun Star. Pagadian City Council is offering a reward of 200,000 pesos, around $4,225, to anyone providing information on Sinnott's whereabouts.

"We are hoping that it (the reward) could be an avenue for any information that may lead to the rescue of Father Mick," said Allan Molde, spokesman for the Crisis Management Committee set up by police and local officials to assist in finding Sinnott.

Despite the good work done by the Columbans, the order suffered a kidnapping in August 2001 that resulted in the death of Father Rufus Halley, murdered by his five abductors along a lonely stretch of coastal road.

The southeastern Philippine island of Mindanao is known for its kidnappings and militant groups. At the same time as searching for Sinnott, the military and police are also now on the lookout for two other kidnapped high-profile local community people abducted in the past week or so.