Church of England bishop says 'Anglican experiment is over' 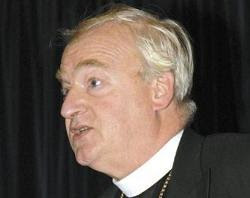 Members of the traditionalist Anglican group Forward in Faith recently concluded their annual gathering, which was dedicated to discussing Pope Benedict's overture to Anglicans.

The general impression left by the conference was the “Anglican experiment is over,” a mood that was reinforced by Bishop John Hind officially announcing he is ready to become Catholic.

The 2009 National Assembly of Forward in Faith was held in the Emmanuel Centre, Westminster, London, October 23-24.

The Assembly was originally scheduled before the Vatican announced its unprecedented move, but the issue dominated most of the discussion.

Speaking to the press during the event, the Right Reverend John Hind, Anglican Bishop of Chichester, announced he is considering becoming a Roman Catholic.

Hind, the most senior traditionalist in the Church of England, told “The Telegraph” that he is willing to sacrifice his salary and palace residence to join the Catholic Church.

“This is a remarkable new step from the Vatican,” he said. “At long last there are some choices for Catholics in the Church of England. I'd be happy to be re-ordained into the Catholic Church.”

The bishop said that he expects his previous ministry will be recognized in the Catholic Church, but stressed that the divisions in the Anglican Communion could make it impossible to stay. “How can the Church exist if bishops are not in full communion with each other?” he asked.

During the conference, the Right Reverend John Broadhurst, who is the Anglican Bishop of Fulham and the Primate of Forward in Faith, affirmed that “the Anglican experiment is over.”

Bishop Broadhurst said that Pope Benedict has made his offer in response to the pleas of Anglicans who despair at the disintegration of their Church.

“Anglicanism has become a joke because it has singularly failed to deal with any of its contentious issues,” said the bishop.

“There is widespread dissent across the [Anglican] Communion. We are divided in major ways on major issues and the Communion has unraveled. I believed in the Church I joined, but it has been revealed to have no doctrine of its own. I personally think it has gone past the point of no return. The Anglican experiment is over.”

In an emotional closing speech on Saturday, Bishop Broadhurst used the metaphor of the frog and the boiling pot to describe the current Anglican status.

“And It is the presumption of our Church in this present period that has caused such pain and anguish to many of us.

“Oh yes, the ordination of women was the water being turned up; we knew that we were going to be cooked to death ...

“And what the general (Anglican) Synod did, was to say, ‘We will push the pot towards the edge of the gas, as long as you stay on this side of the pot, with a few ice cubes, it'll be all right,’” Bishop Broadhurst said.

Then he explained: “We've never claimed that Anglicanism is the Church of Jesus Christ, and we've always claimed and believed that there needs to be catholic unity.”

The Right Reverend Martyn Jarrett, Anglican Bishop of Beverley, also insisted on the fact that “there are questions over the church's survival,” explaining that the Church of England has changed too dramatically for some traditionalists.

“The offer from the Vatican is momentous and I felt a great sense of gratitude that the Roman Catholic Church is thinking about the position of traditionalist Anglicans,” he added.

Another participant at the “Forward in Faith” conference, Fr. Edward Tomlinson, Anglican Vicar of St. Barnabas, said that he would be following the lead of Bishop Hind.

“The ship of Anglicanism seems to be going down... We should be grateful that a lifeboat has been sent. I shall be seeking to move to Rome. To stay in the Church of England would be suicide,” Fr. Tomlinson said.

The association says that it finds such practices not only “contrary to the Scriptures as they have been consistently interpreted by the two thousand year tradition of the churches of both East and West,” but also as a “new and serious obstacle in the way of reconciliation and full visible unity between Anglicans and the Roman Catholic and Orthodox churches.”
+++++++++++++++++++++++++++++++++++++++++++++
Disclaimer