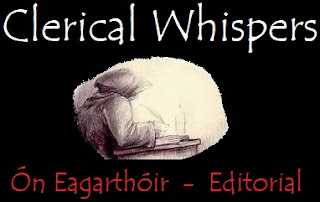 Here in CW, we have always taken great pride in publishing the (three times verified) truth, much to the chagrin of some, the shock of many, and the disgust of more.

But we pride ourselves on our due dilligence in seeking the truth, irrespective of the attempts of many to thwart us, by attempting to discredit us individually or collectively.

This became more than evident in recent days when a matter was brought to our attention, which we have now acted upon.

Let us be very clear - we here in CW will not be intimidated by the attempts of those who obviously do not want something to be revealed - and indeed your attacks on us will only encourage us on.

Bear in mind that unlike YOU, we will publish facts, not the untruths that you have thus far published.

More pointedly, to certain persons in Roscommon, Sligo and Westmeath (and further afield) who are attempting this calumny (yet again), be advised that in continuing to behave in such a fashion you are actually vindicating our position in relation to you - singularly and collectively.

The fact that the person we know to be doing this is a proven protector of a convicted paedophile priest (who he wished to move to Ireland) raises more questions of you than of your intended targets.

We are lucky here in CW that we have some fine legal backup since 2016, and also 2 great tecchies who are well able to track the IP address of every single visitor...so be advised...this is not 2010!!

And all information obtained since 2010 from those (formerly) in certain organisations - both sides of the Atlantic, is greater and more incriminating than you perhaps would like to be known....don't piss us off!!

We tend to print with proof behind us, not lies!!