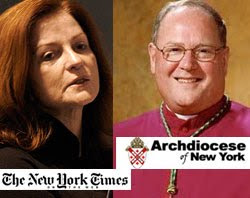 The New York Times declined to publish an op-ed presented by the Archbishop of New York, Most Reverend Timothy M. Dolan, in which he made the point that the “Gray Lady” has been reporting stories with a strong anti-Catholic bias.

In his new blog on the archdiocese’s website, Archbishop Dolan explains that his article was submitted in a slightly shorter form to the New York Times as an op-ed, but the Times declined to publish it.

In the blog version, Archbishop Dolan says that next to baseball, “sadly, America has another national pastime, this one not pleasant at all: anti-Catholicism.”

“If you want recent evidence of this unfairness against the Catholic Church,” writes the Archbishop, “look no further than a few of these following examples of occurrences over the last couple weeks.”

On October 14, in the pages of the New York Times, reporter Paul Vitello exposed the sad extent of child sexual abuse in Brooklyn’s Orthodox Jewish community.

“Yet,” Archbishop Dolan observes, “the Times did not demand what it has called for incessantly when addressing the same kind of abuse by a tiny minority of priests: release of names of abusers, rollback of statute of limitations, external investigations, release of all records, and total transparency.”

“Given the Catholic Church’s own recent horrible experience, I am hardly in any position to criticize our Orthodox Jewish neighbors, and have no wish to do so... but I can criticize this kind of ‘selective outrage,’” he insists.

The op-ed explains that “In 2004, Professor Carol Shakeshaft documented the wide-spread problem of sexual abuse of minors in our nation’s public schools; while in 2007, the Associated Press issued a series of investigative reports that showed numerous examples of sexual abuse by educators against public school students.”

“Both the Shakeshaft study and the AP reports were essentially ignored, as papers such as the New York Times only seem to have priests in their crosshairs,” the Archbishop writes.

The Archbishop then takes issue with a New York Times October 16 “front page, above-the-fold story on the sad episode of a Franciscan priest who had fathered a child.”

“Even taking into account that the relationship with the mother was consensual and between two adults, and that the Franciscans have attempted to deal justly with the errant priest’s responsibilities to his son, this action is still sinful, scandalous, and indefensible.”

“However,” he writes, “one still has to wonder why a quarter-century old story of a sin by a priest is now suddenly more pressing and newsworthy than the war in Afghanistan, health care, and starvation–genocide in Sudan.”

“No other cleric from religions other than Catholic ever seems to merit such attention,” he charges.

Then, on October 21, the Archbishop recounts, “the Times gave its major headline to the decision by the Vatican to welcome Anglicans who had requested union with Rome.”

“Fair enough. Unfair, though, was the article’s observation that the Holy See lured and bid for the Anglicans.

“Of course, the reality is simply that for years thousands of Anglicans have been asking Rome to be accepted into the Catholic Church with a special sensitivity for their own tradition,” he explains.

Nevertheless, the Archbishop of New York says the “most combustible example” was “an intemperate and scurrilous piece” on the opinion pages of the Times by Maureen Dowd, a 57-year-old alumna of Catholic University of America who has a history of anti-Catholic bias.

“In a diatribe that rightly never would have passed muster with the editors had it so criticized an Islamic, Jewish, or African-American religious issue, she digs deep into the nativist handbook to use every anti-Catholic caricature possible, from the Inquisition to the Holocaust, condoms, obsession with sex, pedophile priests, and oppression of women, all the while slashing Pope Benedict XVI for his shoes, his forced conscription -- along with every other German teenage boy -- into the German army, his outreach to former Catholics, and his recent welcome to Anglicans.”

Describing the current visitation of women religious by Vatican representatives as “the matter that triggered the spasm” of Dowd, Archbishop Dolan says that it “is well-worth discussing, and hardly exempt from legitimate questioning.” “But her prejudice, while maybe appropriate for the Know-Nothing newspaper of the 1850’s, the Menace, has no place in a major publication today.”

“I do not mean to suggest that anti-Catholicism is confined to the pages New York Times,” writes Archbishop Dolan, who also admits that “the Catholic Church is not above criticism.”

“We Catholics do a fair amount of it ourselves. We welcome and expect it. All we ask is that such critique be fair, rational, and accurate, what we would expect for anybody. The suspicion and bias against the Church is a national pastime that should be ‘rained out’ for good.”

The Archbishop of New York, also an alumnus of the Catholic University of America with a doctorate in Church History, writes that “my own background in American history should caution me not to hold my breath.”

“Then again, yesterday was the Feast of Saint Jude, the patron saint of impossible causes.”