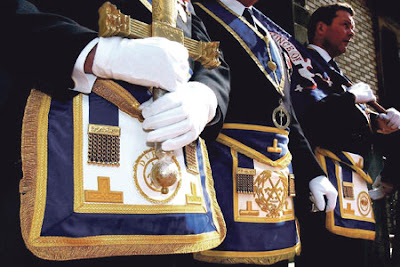 A few years ago I was told that at the ceremony of induction of the vicar of one of the local Anglican churches, the Bible which was handed to him had embossed on its front cover the emblem of the Freemasons, the square and compasses.

It subsequently came to light that nearly all the male members of his Parochial Church Council were "on the square", and his predecessor as vicar had been a Mason as well.

This is not a "low", or Evangelical, church, but very firmly in the Anglo Catholic tradition, where a number of clergy and lay people over the years have talked of becoming Catholics.

Why is all this a problem?

The reason is that the Catholic Church teaches that Freemasonry and Christianity are incompatible.

The Holy See in 1983 reiterated the traditional position that Catholics who are Freemasons are in a state of grave sin and may not receive the sacraments - the Declaration on Masonic Associations was signed by the then Cardinal Joseph Ratzinger and makes it clear that local bishops cannot dispense from its provisions.

There were two reasons for this document: first, the new Code of Canon Law, which came out at the same time, no longer mentioned Freemasonry by name in its list of organisations which Catholics are forbidden from joining; second, mistaken advice had been given in the late Seventies in Britain and America which suggested that Catholics could be Freemasons if local lodges were not anti-Catholic; the 1983 rescript corrected that advice.

Consequently, Anglicans or others who are Freemasons wishing to become Catholics will have to discard their aprons: this may keep the numbers of potential converts down.

It is often claimed by Freemasons and others that the reasons for the Catholic Church's hostility to Freemasonry are to do with politics - the political hostility between the Church and what is known as "Grand Orient" Freemasonry in the rest of Europe and Latin America; English Freemasonry is completely different, it is claimed; unlike the "Grand Orient" it has retained belief in the "Supreme Being".

But this is nonsense: the Church's original condemnations from the 18th century related to English Masonic lodges in Florence and elsewhere in Italy.

The reasons for our teaching, expounded in teaching from many popes since the 18th century, are theological.

In the first place, Freemasonry is a naturalistic religion. Its rituals and constitutions present the member as a man who is able to advance towards enlightenment through his own efforts - a good parable of this is the depictions of the trials of Tamino in Mozart's opera The Magic Flute.

The Mason can earn his salvation through rites of initiation and the activities of the lodge (including charitable giving); it is thus, in a way, the perfect religion for the "self-made", middle-class professional man.

It is totally at odds with the Christian vision, in which we need God's grace, through the death and resurrection of Our Lord, to grow in holiness.

Second, the prayers in its rituals specifically exclude reference to Our Lord. They are often prayers of Christian origin which have been vandalised.

In order to encompass adherents of other faiths the Saviour of the world is simply removed and set aside: he is not important. How can any Christian go along with this?

Third, the oaths required in the initiation rites require the new Mason to promise to keep secret the organisation's rituals, even though he does not at that point know what they are. These oaths are what Christian moral theologians call "vain" - they are not acceptable and cannot bind the person making them, even if they are done in the name of God. This is the problem with the oaths, not (as is sometimes claimed) the dire penalties which used to be referred to in the rituals.

These are the principal reasons why we teach that Freemasonry and Christianity are not compatible. In addition, we could cite the reactionary world view espoused in the rituals, supportive of the status quo and urging members to "keep to their station" in society.

This, coupled with the make-up of lodges and the mechanisms of social control identified in exposés written in the Eighties reveal the movement as being somewhat at odds with the social teaching of the Catholic Church and our witness for justice and peace in the world.

The "preferential option for the poor" would not find a place in the lodge. One could also point to the exclusion of women from lodge membership and the strain placed on many marriages by the commitments demanded of Freemasons: in spite of claiming to be a "system of morality" infidelity and adultery seem often to be viewed with some indulgence.

It is important that Catholics rest their challenge to Freemasonry on the clear theological arguments which I have advanced and that we are well-informed about the subject: sometimes criticisms of Freemasonry are inaccurate and frankly hysterical, and we should avoid conspiracy theories.

It is also true that it is somewhat weaker than it was, partly as a result of the books written 20 years ago and pressure for Freemasons to reveal their membership, particularly in the police and the legal profession. Because of the decline, Freemasonry is very conscious of its public image and superficially less secretive than in the past.

Although it is weaker than in the past, Freemasonry still seems to have some influence in the Church of England. A study written by Caroline Windsor, Freemasonry and the Ministry (Concilium publications 2005), has shown that it is still quite strong in cathedrals (a big Masonic service was held in St Paul's Cathedral in 2002, with the Dean preaching) - and also that many parishes where Freemasons are active are weak in terms of Christian witness.

If we are serious about ecumenical dialogue, the issue of Freemasonry has to be addressed; the same is true of interfaith relations, as Freemasons are sometimes involved in interfaith organisations - if they are there, we are talking about dialogue which is three-way, not two-way.

The overriding problem is that in spite of what Freemasons claim, their way of life is a religion, with all of religion's hallmarks.

Catholics are committed to inter-faith dialogue and mutual respect, but this requires Freemasons to be honest about what they are.

You are implying that freemasonry is not as rife among Catholics, and our clergy? You need to reassess this. It is endemic among us. Probably more so than in the Anglican Church.