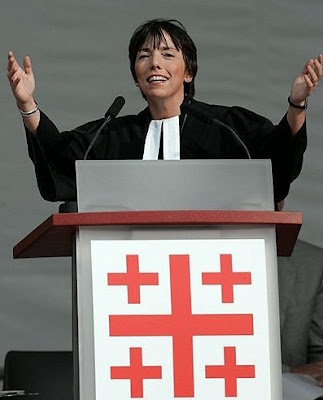 German Protestants on Wednesday elected Margot Kaessmann, a divorcee and the Lutheran bishop of Hanover, to lead them, the first woman to take the post and only the third woman to head a major Church.

Kaessmann, 51, a regular on television talk shows and known in the media as the "pop bishop", was considered something of a controversial candidate to lead Germany's roughly 25 million Protestants because she is divorced.

But she won 132 of 142 votes at a synod of the EKD, an umbrella group for 22 Lutheran, Reformed and United Churches, in the vote to replace the retiring Berlin Bishop Wolfgang Huber, 67, as EKD chairman.

"The election sends a signal to the Church worldwide that God calls us to leadership without consideration of gender, colour or descent," Rev. Ishmael Noko, general-secretary of the Lutheran World Federation, told the Ecumenical News International news agency at the synod in Ulm.

The mother-of-four will be charged with reviving the appeal of the Church, which has been losing members in recent years.

She has a reputation as a moderniser and supporter of closer dialogue between Catholics and Protestants. "We Are Church," a reform group of Catholic lay people, said the election sent a signal of hope for Catholics who support women clergy.

German-born Pope Benedict is firmly against any change in the celibate male clergy in Catholicism, the world's largest Church, and offered last week to take in conservative Anglicans opposed to female priests and gay bishops in their Churches.

The only other female heads of large Churches are Presiding Bishop Katharine Jefferts Schori of the Episcopal Church in the United States and National Bishop Susan Johnson of the Evangelical Lutheran Church in Canada.

Queen Elizabeth is the Supreme Governor of the Church of England but Archbishop of Canterbury Rowan Williams is its head.