Pope to Armenian Patriarch: May We Grow in Unity 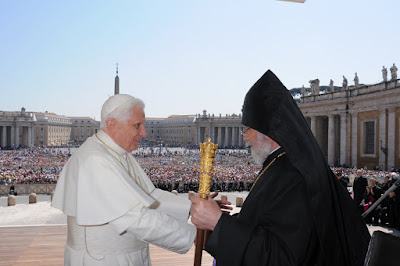 Relations between the Catholic Church and the Armenian Apostolic Church are enjoying a fruitful stage, and Benedict XVI is hoping the two churches will continue to grow in unity.

The Pope wrote this in a message sent to Karekin II, Supreme Patriarch and Catholicos of All Armenians, on the occasion of the 10th anniversary of his election.

In his message, the Holy Father thanked Karekin II for his "personal commitment to dialogue, cooperation and friendship between the Armenian Apostolic Church and the Catholic Church. I pray that the good relations that have been established between us may continue to grow in the years ahead."

"The recovery of liberty of the Church in Armenia at the end of the last century brought joy to all Christians worldwide," wrote the Pope, recalling also that "the immense task of reconstruction of the ecclesial community fell on the shoulders of your Holiness."

From 1915 to 1922, the Young Turks -- an ultra-nationalist secular movement that took power in Turkey -- exterminated Armenian Christians for ethnic and religious reasons. Of a population of some 2.6 million Armenians in the then dying Ottoman Empire, almost 1.5 million were killed.

In his message, the Pope expresses his joy over "the flowering of new initiatives for the Christian education of young people, the formation of the clergy, the creation of new parishes, the construction of new churches and community centers, as well as the promotion of Christian values in the social and cultural life of the nation."

Benedict XVI concluded the message with a prayer: "That we may be ever more closely united in the sacred bond of Christian faith, hope and love."

These Churches separated from Rome after the Fourth Ecumenical Council of Chalcedon in 451, over controversy arising from the council's adoption of the Christological terminology of two natures in one person.