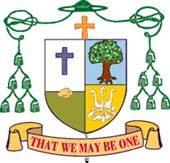 The Roman Catholic clergy is under fire over a Victorian woman's accusation that a Catholic priest in Ballarat sexually abused her when she was seven years old.

Her lawyers sent a letter outlining the woman's claims to every parish in Victoria, asking that it be read to all Victorian congregations.

The alleged victim says she was sexually abused by Gerald Ridsdale, a former priest who is currently serving a prison sentence for abusing more than 20 children.

But Ballarat's Bishop says he is convinced the priest did not sexually abuse the woman and the Catholic Archbishop Denis Hart has instructed Melbourne's priests to ignore the letter.

She recounted the alleged abuse on Fairfax Radio in Melbourne this morning.

"I was made to drink my own urine, eat my own vomit. I was beaten many times," she said.

"Yes, by Ridsdale, I was [sexually assaulted], yes."

The woman says her abuse began in the 1960s when she was seven years old at an orphanage run by the Catholic church in the regional Victorian city of Ballarat.

That claim is disputed by Ballarat's Bishop, Peter Connors, who says he is convinced the woman's version of events is wrong.

Nonetheless, she was given a $12,000 payment several years ago by the organisation that ran the home.

A spokeswoman for The Sisters of Nazareth has told the ABC the payment was a compassionate one or, in her words, "a pastoral gesture", not a compensation payment.

The Catholic Church says $12,000 was not related to the woman's current claims.

Angela Sdrinis, the alleged victim's lawyer, has sent a letter detailing her client's abuse claims to every Victorian parish priest, to point out that the Catholic Church's legal structure makes adequate compensation almost impossible to obtain.

"The Catholic Church, they've been hiding behind what I could call a corporate veil for over a decade," she said.

"In the cases of historical sexual abuse, the head of the church or the religious order in question has often passed away, they no longer exist.

"That leaves the property trust as the only legal entity that can be sued, and the High Court agreed with the argument of the Catholic Church that as the property trust has nothing to do with the hiring and firing and supervision of priests, they can't be held liable in cases of sexual abuse.

"So that leaves victims with no-one to sue."

The ABC has seen a copy of a letter Archbishop Dennis Hart wrote to Melbourne's parish priests in response to Ms Sdrinis' letter.

In it, Archbishop Hart says the claims of abuse have no connection to the Archdiocese of Melbourne and that a complaint in relation to the abuse has already been dealt with.

Archbishop Hart goes on to say that it is inappropriate for the letter's contents to be shared in the parishes of the Melbourne Archdiocese.

'Make it easier' for victims

But Chris MacIsaac, who leads Broken Rights - a support group for people sexually abused by Catholic clergy - says the Catholic church needs to make it easier for victims of abuse to pursue their claims.

"It is very fragmented and it's very difficult to know who can be sued and who can't, and at the end of the day, victims feel that they've used everything in their power to keep them away from a fair and just outcome."

"The Towards Healing program that is used by most of the dioceses and religious orders in Australia and the Melbourne protocol itself make provision to deal pastorally with people who make these allegations and in the appropriate cases that can involve compensation," he said.

"That is an alternative to litigation. The suggestion that the church can't be sued is simply not correct."

Father Lucas says he does not believe the woman who spoke out today was abused by Ridsdale at the Ballarat orphanage.

"The allegations were referred to the Victoria police who did not take any action," he said.

"But apart from that, the church's own internal process under the Towards Healing protocol involved an independent assessment that was very thoroughly undertaken and in the particular case it was found that there were inconsistencies in the way that the story was being presented which suggested it lacked credibility.

"There was then an appeal against that and the review panel reviewed the assessment and came to the same conclusion."