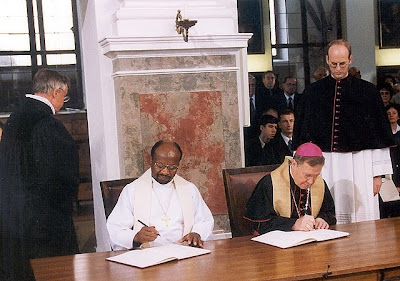 Several commemorative events will be held in Augsburg, Germany, over the next two days to celebrate the signing of a landmark ecumenical agreement made ten years ago between representatives of the the Lutheran World Federation (LWF) and the Roman Catholic Church.

It was on Oct. 31, 1999, that the Joint Declaration on the Doctrine of Justification (JDDJ), considered one of the most significant agreements since the Reformation, was signed by church officials from the Vatican and the Lutheran World Federation, which today represents 66.7 million of the world's 70.2 million Lutherans.

Members of the World Methodist Council later adopted the document by unanimous vote as well, in 2006, and will be present for this weekend's commemorative events.

"For hundreds of years, the issue of justification by faith divided Catholics and Protestants," said Bishop Gregory Palmer, president of The United Methodist Church’s Council of Bishops, in a released statement. "This agreement celebrates consensus on the basic truths of the doctrine of justification."

As the LDDJ states, "justification was the crux of all the disputes" between the Roman Catholic Church and the Lutheran tradition, which broke from the former church body and gave rise to the Protestant Reformation. Thus, the two faith groups believed that a common understanding of justification was "fundamental and indispensable" to overcoming the division.

Justification, according to the document, is the forgiveness of sins, liberation the dominating power of sin and death, and from the curse of the law, and it is acceptance into communion with God – all of which is from God alone, for Christ's sake, by grace, through faith in the gospel of God's Son.

In their common understanding, members of the Lutheran church body and the Roman Catholic Church together confess: "By grace alone, in faith in Christ's saving work and not because of any merit on our part, we are accepted by God and receive the Holy Spirit, who renews our hearts while equipping and calling us to good works."

Though the joint declaration does not cover everything that either church teaches about justification, it encompasses a consensus on basic truths of the Christian doctrine.

Still, differences remain over language, theological elaboration, and emphasis in the understanding of justification with regard to such matters as good works but the Lutheran and Catholic churches say those differences do not destroy the consensus regarding the basic truths.

The JDDJ was not signed without objections. Some in the Lutheran tradition were shocked to see their leaders make what they described as a compromising move.

Nevertheless, the joint declaration is often cited as a significant achievement in religious history.

The highlight of the upcoming commemorative celebrations will be a ceremony on Friday evening in the Golden Hall of the Augsburg “Rathaus.”

On Saturday, presentations related to the JDDJ will continue with speakers including the long-serving bishop of the Evangelical Methodist Church in Germany, Dr. Walter Klaiber of Tübingen, and the former president of the German Bishops’ Conference, Cardinal Karl Lehmann of Mainz.

The president of the Pontifical Council for Promoting Christian Unity (PCPCU), Cardinal Walter Kasper, and the general secretary of LWF, the Rev. Dr Ishmael Noko, will give the closing remarks.