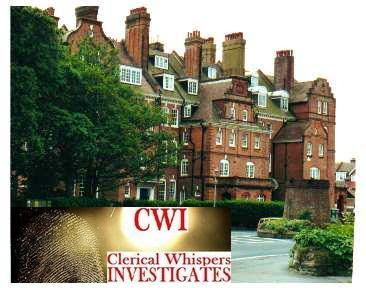 Research into the business malpractices of a senior Catholic prelate based at St Peter and St John 1 Caesars Camp Road Camberley have uncovered facts which the Catholic Herald is afraid to print.

Monsignor Madders and his brother are permanent unelected directors of Helena Court Residents Association which controls the freehold of a block of mansion flats Helena Court in Pevensey Road,Hastings East Sussex.

Monsignor Madders and his brother thus have all the advantages of owning a freeholdworth over 2 million pounds without having to pay a cent.

This company has threatened two leaseholders in Helena Court with litigation leading to the possible loss of their homes because of their inability or reluctance to pay inflated service charges which are fixed by Monsignor Madders & his brother Kevin Madders.

The freehold belongs to all the leaseholders but the Madders company has gained control of it and deliberates in secret.

They initiated litigation against one leaseholder who was serving in Iraq and unable to defend himself.

The local MP has referred this case to the Ombudsman.

Monsignor Madders is a director of Highland Gardens Investment Co. which exists to buy flats in Helena Court at reduced prices.

The website http://www.helenacourt.net/ is controlled by Mosignor Madders and his brother and actually states that the price of flats in this block is artificially low because the service charges are artificially high .

This is convenient for the Madders who fix these service charges and whose company, Highlands Gardens, Investment Company exists to buy flats in the block.

They already own two flats.

Their recent attempt to buy a third from a single lady Ms Barbara Bolton,( tel 01424 720044) who could no longer afford their inflated service charges was rebuffed on principle.

They have been promising to issue 999 year leases to the leaseholders of Helena Court since 2003 but have never honoured this promise.

Meetings for residents to express their grievances are advertised but never held.

Complaints about the deplorable behaviour of their agent Mr George Okines who has threatened elderly ladies with forced entry to their homes have been ignored by the Madders.

According to the auditor,Mr Steve Cooper of McPhersons,2 Cambridge Gardens,Hastings,East Sussex ,Highlands Gardens Investments is financed by a shell company in Liechtenstein named ITSS AG VADUZ.

This is in violation of S19 (1) of the Financial Services and Markets Act 2000.Money laundering via Liechtenstein is extremely serious.

Monsignor Madders is also liable for prosecution under S 21 of the 1985 Landlord and Tenant Act 1985 for serious accounting irregularities.

His agent Mr George Okines trading as Arko Property Management 123 Bohemia Road Hastings has exacted over 100,000 pounds from the leaseholders of Helena Court Pevensey Road,East Sussex but refused to account for any of these funds.

Monsignor Madders and his associates have issued newsletters publicly threatening people who can't or won't pay the exorbitant service charges with legal proceedings leading to the possible loss of their homes.

His agent Mr George OKines is a known associate of Mr Marc Sulc who has served four prison sentences for offences including fraud and violence.

His other associate is Mr Chris Byron who has served 7 years for armed robbery.

Mr Sulc was in fact exposed by Martin Bright in the Observer in 2002 as a notorious ganster whose speciality was using legal subterfuges and intimidation to force people to sell their flats for ludicrously low prices.

These are rather unusual associates for a senior clergyman.

Both the bishop and the Catholic Herald have detailed files on all Madders' activities but will not act.