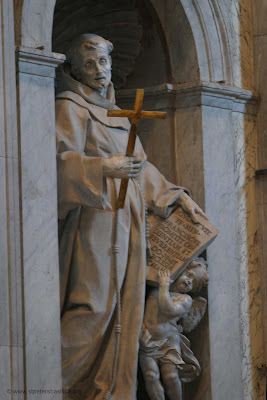 Two thieves carrying a bronze statue of Catholic saint Francis of Assisi were caught by Italian police because the statue was too heavy.

The 80 kilogramme, 1.70 metre statue was placed on a fountain in a public garden near the military base of Cecchignola on the outskirts of Rome.

Police caught the thieves, a 47 year-old man from Rome and a 49 year-old Romanian man, using special tools to remove the statue from the fountain and then tried to take it to their pick-up van.

Because of the weight of the statue, both thieves struggled to take it to their van when they were spotted by a patrol unit from Italy's paramilitary police. The thieves tried to escape but were later arrested.

Both of them were unemployed and were previous offenders.

Saint Francis of Assisi was a Catholic deacon and the founder of the Franciscans. He is considered the patron saint of animals, the environment and Italy.