3rd. Local Woman to be Ordained a Roman Catholic Womanpriest 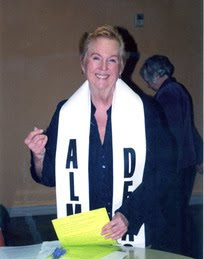 Marybeth McBryan, a former member of the St. Louis Public Schools Board of Education and current deacon at Therese of Divine Peace, will be ordained as a Roman Catholic Womanpriest this Sunday.

McBryan is the third local woman in the last two years to be ordained through the Virginia-based Womenpriest program.

McBryan says she's prepared to face criticism from Roman Catholics and others who don't believe women have the right to deliver sacraments. "I don't believe that I'm in any position to judge anyone, so I kind of take the attitude that [my critics] aren't either. Nobody died and made them God."

McBryan is currently a real estate agent. She taught elementary school in a number of area parochial schools over the years and subbed for a time in the St. Louis Public Schools. She says she joined a convent in O'Fallon at age seventeen but left the sisterhood and later married.

McBryan says she raised her kids in the Roman Catholic Church and sent them to parochial schools. She has fallen in and out of the church at times, worshipping most recently at two institutions led by excommunicated priests: St. Stanislaus Kostka and Therese of Divine Peace.

The Archdiocese has not contacted McBryan about her upcoming ordination, though invitations to some people within the organization went out earlier this month.

"I have some really good friends who are priests, but they've been amazingly silent since they received my invitation," she says. "I know they wouldn't come to my ordination -- but not a word of congratulations or, Gee, how are you? None of that.