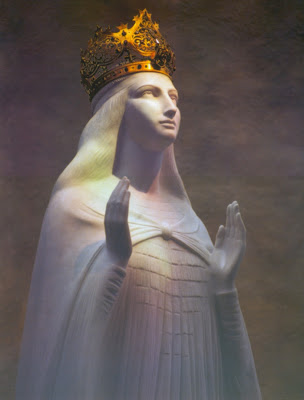 UP to 15,000 people are preparing to defy the head of the Catholic Church in the west of Ireland today by gathering in Knock's shrine in expectation of an appearance of the Blessed Virgin Mary.

Dublin clairvoyant Joe Coleman has predicted that the apparition will take place at 3pm and that the crowds will far exceed the 5,000 influx who came on October 11 after his first Marian prophecy.

Today's event has been hyped by a YouTube video of the sun breaking through the clouds at Knock on October 11 with a voiceover by Mr Coleman claiming that this was the celestial presence of the Virgin Mary.

Ignoring a blunt statement issued last Monday by the Archbishop of Tuam, Dr Michael Neary, distancing the official Irish Church from Mr Coleman, hundreds of pilgrims have already arrived in Knock. Many of them are Travellers.

All hotels and guest houses in the small East Mayo village were fully booked out last night, and many pilgrims were seeking overnight accommodation in nearby towns, such as Kiltimagh and Jarroldstown.

Many families were sleeping overnight in camper vans parked in the main street.

Bridget said she hoped to see Her but expected only to see a vision in the sky.

Mary Connors said that at least 600 people, mostly Travellers, were coming from Wexford, mainly from New Ross and Gorey.

"We have faith in Our Lady," she said. "We do the Novena every year."

However, she complained about conditions in Knock yesterday, saying that the shops were closed and that they could not get access to toilets.

Campers, she said, were not being allowed into the car park.

She was disdainful of Archbishop Neary, and said that her faith would not be affected if she did not get a glimpse of the Virgin.

Describing himself as a devoted Catholic, Willie Reilly, from Clondalkin, Co Dublin, said: "I heard about the apparition from listening to Joe Coleman and I was curious to come. But I am not looking for a miracle."

Kevin and Fiona McGuinness with their three children, Laurence, Lucy and baby Felicity, walked around both the old church and the Apparition Chapel several times while reciting decades of the Rosary.

"We try to do a pilgrimage once a year," said Fiona. "We said the decades of the Rosary in the car during the drive from Rush."

But Fiona said her faith would never be damaged if Our Lady did not appear today.

"She appeared here once in 1879 and nothing can take away from that apparition."

Michelle De Silver, from Singapore, said she was a Buddhist but had read about the reported apparition on the internet and was curious to see Knock.

"It is a very peaceful place," she said, but would not be here today.

Staying indoors and well out of sight were the local clergy.

When did toilets ever bother tinkers? what rubbish they write in papers to fill the spaces. If you lived in Dublin they would urinate through your letter box before cleaning their ass on your door mat.
The main topic should be if Joe Coleman and Our Lady of Knock are best buddies why was he not there to greet her himself, no instead he was earning 100euros per sitting. Maybe he would have been carved up on the Alter with a few machettes had he been and failed to deliver.
The reporter failed to report that on any given day theres an average of 18,000 plus people in adoration at knock.