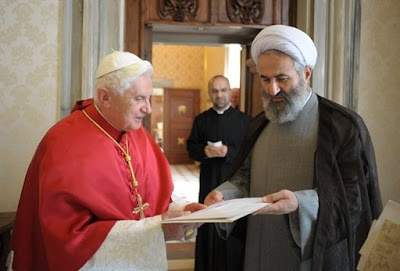 Pope Benedict XVI on Thursday urged a "greater opening" by Iran to the international community as he met Tehran's new ambassador to the Vatican.

"Iran is a great nation... and its people have a deep religious sensibility," the pope said as he accepted Ali Akbar Naseri's credentials.

"That may be a reason to hope for a greater opening and confident collaboration with the international community," he said as a long-running stand-off over Iran's nuclear programme appeared inching towards a resolution.

"We must all hope and support a new phase of international cooperation," said the head of the Roman Catholic Church.

Benedict also urged greater freedom of religion and conscience, saying: "Among universal rights, religious freedom and freedom of conscience hold a fundamental place because they are the source of other freedoms."

Early this year the pope said Catholic priests and other religious figures working in the Islamic Republic had a "difficult mission" in reaching Christian communities there and proposed a bilateral commission to foster "reciprocal understanding."

"Catholics have been present in Iran since the first centuries of Christianity," Benedict said, adding: "This community is truly Iranian."

He said the Church was "confident that the Iranian authorities will strengthen and ensure the freedom of Christians to profess their faith, and ensure the Catholic community the conditions essential for its existence."