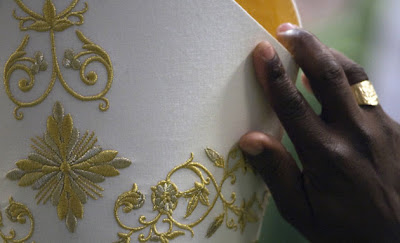 Catholic leaders in Africa must defend the dignity of women and promote their role in Church and society, said the Synod of Bishops for Africa.

Synod members promised to promote the education of girls and women, open shelters for those who are abused and bring women into Church decision-making structures.

They also asked that a special commission on women in the Church be established within the Pontifical Council for the Family.

In their final message to the world, the 275 members of the synod condemned "all acts of violence against women."

Examples of such violence include "the battering of wives, the disinheritance of daughters, the oppression of widows in the name of tradition, forced marriages, female genital mutilation, trafficking in women and several other abuses such as sex slavery and sex tourism," said one of the propositions approved by the synod.

The Oct. 4-25 synod concluded with calls for better treatment of the family and an end to political corruption.

Africa needs "saintly politicians who will clean the continent of corruption, work for the good of the people and know how to galvanize other men and women of good will from outside the Church to join hands against the common evils that beset our nations," said the message.

The bishops praised those who have used their role in public office for the common good. But they criticized the "many Catholics in high office (who) have fallen woefully short in their performance in office."

The synod propositions spoke of the family as being of "capital importance" for protecting human life and for learning and practising forgiveness, peace, reconciliation and harmony.

Yet they also said the family is under threat because of abortion, the denigration of childbearing, "the distortion of the notion of marriage and the family itself," and divorce.

The bishops called for better education of Catholics in the meaning of Christian marriage, improved marriage preparation programs and better support for families.

CARING FOR PEOPLE WITH AIDS

Archbishop John Olorunfemi Onaiyekan of Abuja, Nigeria, president of the synod's message-drafting committee, told reporters that the Church is "second to none" in helping people affected by HIV and AIDS and that its contribution deserves more recognition.

"Many of those who go around distributing condoms will not go near anybody with HIV and AIDS and there are many who need assistance," Onaiyekan said at a Vatican press conference Oct. 23.