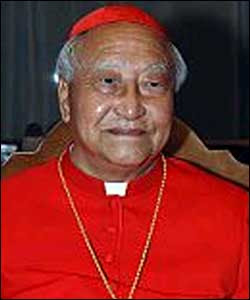 Seoul Cardinal Nicholas Cheong Jin-suk has described the assassination 100 years ago of a Japanese colonial official by Catholic independence activist, Thomas An Jung-geun, as an act for peace in East Asia.

An was a devoted Catholic whose actions were based on the justice of Christ, Cardinal Cheong said, UCA News reports.

The cardinal was speaking during the Oct. 26 launch of an exhibition marking the 100th anniversary of An’s killing of Ito Hirobumi, Japan’s first prime minister and the first Japanese resident general of Korea.

The cardinal admitted that the Church had frowned upon An’s memory by strictly applying the commandment, “Thou shalt not kill,” for a long time.

Ito, who paved the way for Japan’s 1910 annexation of Korea, was shot dead on Oct. 26, 1909, in Harbin in northeastern China during talks with Russia.

Koreans regard An’s assassination of Ito as a symbol of Korea’s struggle for independence from Japanese colonial rule, which lasted officially from 1910 until Japan’s defeat in World War II in 1945.

However, the Catholic Church condemned his act for many years and changed its position only 16 years ago.

In 1993, the late Cardinal Stephen Kim Sou-hwan of Seoul spoke about An as a soldier and his act as one of national defense.

“The Catholic Church does not regard killing committed to defend the nation from unjust aggression as a crime,” he said.

The current exhibition, which lasts until Jan. 14, 2010, portrays An as a pacifist and displays some of his writings including “Peace in the East,” an article he wrote while in prison.

The Association for the Commemoration of Patriotic Martyr An Jung-geun organized the display at the Seoul Art Center.

The same day, the Catholic Priests’ Association for Justice (CPAJ) and the Gaudium et Spes Pastoral Institute held a joint Mass commemorating An at Myeongdong Cathedral in Seoul.

During the Mass, Ignatius Cho Kwang, history professor of Korea University, claimed An’s actions were based on his Catholic faith.

After working as a teacher and founding a school, An became a journalist at an anti-Japan newspaper before joining the volunteer army for Korea’s independence, Cho noted. He said that when he was a rebel army general, An always carried a rosary and prayer book.

It is well known that the French bishop of Korea at that time, Bishop August Mutel, condemned the assassination and An was prevented from receiving the Sacraments of Reconciliation and Anointing of the Sick.

The local Church’s position, which was in line with Japan’s at that time, was that An’s action was a crime.