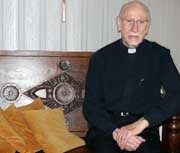 The local pastor of traditional Anglicans says his tiny congregation already considers itself Roman Catholic and that new structures to allow full communion pave the way for an official "homecoming."

Father David Skelton said that for many of the 40 parishioners it was a matter of "if and when" they would join with Rome, and the Oct. 20 Vatican announcement to allow for Anglican "personal ordinariates" makes the decision easier for them.

"We have a very small parish. We are poor and we are largely elderly people," said Skelton.

"We don't have much for resources and, therefore, one of the problems we've had is finding a place of worship. We were fortunate to find a group of very traditional Lutherans who were willing to make their church available to us."

Edmonton's traditional Anglicans, about 40 of them, gather for Mass on Sunday afternoons at Redeemer Lutheran Church, 9654-74 Ave. They also have midweek services in people's homes.

Skelton noted there are also two traditional Anglican parishes in Calgary, one in Medicine Hat and a small parish in Claresholm.

The Traditional Anglican Communion, an Australia-based group, made a formal request to the pope in 2007 for all of its members to be allowed into the Catholic fold. The group has about 400,000 members worldwide, he said.

Opposed to the Anglican Church's liberal bent, the city's small contingent of traditional Anglicans is pleased with Pope Benedict's recent announcement of a new canonical structure.

Once Rome announces the details of the offer for full union, Skelton said it will be up to each individual in his group to decide whether to "swim the Tiber."

The ordination of women and practising homosexuals as well as the blessing of same-sex unions are among the issues that have driven traditional Anglicans away from the Anglican Communion of churches.

"We have always felt, about 30 years ago now, the ordination of women was really the last straw for many of us who are traditional Anglicans, who we have always thought of as being Catholic anyway," Skelton said.

"We thought this was a break from the sacraments, and it was a deviation that the Church is not empowered to make."

The traditionalist group also hopes and expects to maintain its use of the Anglican Book of Common Prayer when it reunites with Rome, he said.

The personal ordinariates - similar to dioceses - are intended to allow Anglicans to maintain their spiritual and liturgical heritage when they come into union with Rome.

"The developments within Rome now are certainly providing a wonderful and very gracious, generous offer to us who have always felt that we were Catholic, to be able to subscribe entirely to the teachings of the Church," said Skelton.

"What's being offered now is a more intimate union because it's a more visible intercommunion with Rome - and that's exactly what we want."

Skelton said some Anglicans will likely want reassurance that their liturgy and doctrines are not going to be diminished.

"As far as our people are concerned, we really don't see any major difference occurring because our liturgies, doctrines and the teachings of our Church are compatible with that of Rome.

"In fact, we seem to be exactly like Roman Catholics, just flying under a different flag."

While some have said the Roman opening to the traditional Anglicans is a "poaching exercise" by the pope, Skelton is confident that is not the case.

"We know that this is a very generous Christian response to people like us who have actually initiated the approach to Rome, saying, 'Please help.'

"This is what we believe and it's what you believe, so we accept without any reservation the Catholic Church," concluded Skelton.