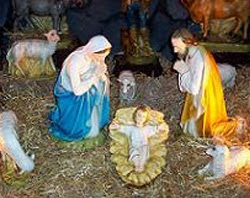 A 63-year-old tradition of having a privately maintained nativity scene on a public median in Warren, Michigan has been ended after the local road commission received a threatening letter from the Freedom From Religion Foundation.

The move has resulted in a lawsuit charging that the ban on the display is discriminatory.

In 1945 St. Anne’s Parish received a donation of Christmas nativity statues which were too large to set up inside the church.

Some parishioners thought the statues and a manger could be displayed in the center of the village during the Christmas holidays.

Since 1945, a nativity display has been erected at the location by Warren resident John Satawa and members of his family. He took over responsibility for the display from his father, Joseph Satawa, who died in 1965.

The Freedom from Religion Foundation claimed that the presence of the nativity display violated the “constitutional principle of separation of church and state.”

In December 2008, after receiving the group’s letter, the Road Commission demanded that Satawa immediately remove the display, citing improper permits.

Satawa’s 2009 permit application was denied on the grounds the nativity display “clearly displays a religious message” in violation of the “separation of church and state.”

On October 23 the Ann Arbor-based Thomas More Law Center filed a federal lawsuit on behalf of Satawa against the Macomb County Road Commission.

The suit charges that the Road Commission’s restriction violates Satawa’s First Amendment rights and his equal protection guarantee under the Fourteenth Amendment.

The Law Center filed the lawsuit to obtain a declaratory judgment that the Road Commission’s actions were unconstitutional and to secure a court order permitting the display.

Law Center attorney Robert Muise, who is handling the case, said that the U.S. Supreme Court holds that public streets are “held in the public trust” and are “properly considered traditional public forums for private speech.”

“Moreover, the Supreme Court has also stated that ‘private religious speech, far from being a First Amendment orphan, is as fully protected under the Free Speech Clause as secular private expression.’ Consequently, by restricting speech because it is religious expression, the Road Commission is imposing a content-based restriction on private speech in a traditional public forum in clear violation of the Constitution,” Muise added.

Law Center President and Chief Counsel Richard Thompson was very critical of the Road Commission’s action and the Freedom From Religion Foundation.

“Every Christmas holiday, militant atheists, acting like the Taliban, use the phrase ‘separation of church and state, ’ — nowhere found in our constitution — as a means of intimidating municipalities and schools into removing expressions celebrating Christmas, a National Holiday,” Thompson charged.

“Their goal is to cleanse our public square of all Christian symbols. However, the grand purpose of our Founding Fathers and the First Amendment was to protect religion, not eliminate it. Municipalities and schools should be aware that the systematic exclusion of Christmas symbols during the holiday season is itself inconsistent with the Constitution.”
+++++++++++++++++++++++++++++++++++++++++++++
Disclaimer