Pope calls Catholics to daily meditation on the Bible 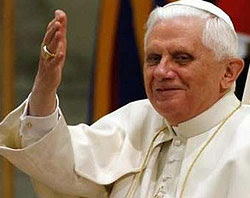 At Wednesday's General Audience in St. Peter's Square, Pope Benedict provided a lesson on the theological renaissance of the 12th century, advising Christians to learn from the monks and set aside time every day to meditate on the Bible, “so that the Word of God will be the lamp that illuminates our daily path on earth."

Benedict XVI began his address to the 15,000 faithful by recalling how the 12th century was a time of a spiritual, cultural and political rebirth in the West.

In that time, theology “flourished, refining methods, advancing towards new problems, in contemplation of the mystery of God,” he said.

As fruits of this development, figures such as St. Thomas and St. Bonaventure would appear in the thirteenth century.

The two different environments in which this theological activity flourished were monasteries and schools, which would soon gave birth to universities, an invention of medieval Christianity.

Monastic theology, the Pope added, was due to abbots gifted with evangelical fervor and dedicated to inspire and nurture the desire for God. The method was primarily linked to the prayerful contemplation of Holy Scripture and the texts of the Church Fathers. The monks, he expounded, "were devoted to the Sacred Scriptures and one of their main activities consisted in lectio divina, that is, a meditative reading of the Bible."

The Holy Father noted the Synod on the Word of God last year recalled the importance of reading Scripture and said it must be built on monastic theology.

"As monastic theology is listening to the Word of God," the Pontiff said, "it is necessary to purify one's heart to welcome it and, above all, one must be full of fervor to encounter the Lord. Theology therefore becomes meditation, prayer, a song of praise, and the impetus for sincere conversion."

The Holy Father emphasized "it is important to reserve a certain time each day for meditation on the Bible so that the Word of God will be the lamp that illuminates our daily path on earth."

Scholastic theology, the Pontiff explained, was formed "around a master and his disciples, to train professionals of culture in an era in which knowledge was increasingly appreciated." The method involves the placement of a "quaestio," a question around which "the discussion between teacher and students revolved."

"The organization of the ‘quaestiones’ led to the compilation of evermore extensive syntheses, the so-called ‘summae’ that were vast dogmatic-theological treatises,” Pope Benedict said. “Scholastic theology sought to present the unity and harmony of Christian Revelation with a method, called precisely 'scholastic,' that grants faith in human reason."

"Echoing the invitation of the First Epistle of Peter scholastic theology invites us to be always ready to answer whoever asks the reason for the hope that is in us," he noted. It "reminds us that between faith and reason there is a natural friendship, founded in creation itself." Faith liberates reason, enabling the human spirit to rise to the loving contemplation of that fullness of truth which is God himself.

Let us pray, Benedict XVI concluded, "so that the path of knowledge and exploration of the mystery of God is always enlightened by divine love."