Vatican called in over case of Father John Fleming 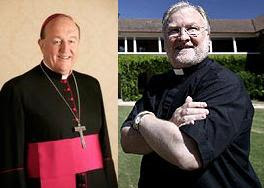 CATHOLIC Archbishop Philip Wilson has flown to the Vatican to seek advice from the Pope's lawyers on what action he should take concerning high-profile priest Father John Fleming.

His unscheduled trip follows a finding by Michael Abbott, QC, that the archdiocese has no jurisdiction to take action against Father Fleming because he was an Anglican priest at the time the incidents allegedly occurred up to 35 years ago.

Church sources said Archbishop Wilson was "seeking counsel'' from the Vatican because he was concerned at the predicament the archdiocese was in.

The unusual finding is one of several made by Mr Abbott in his inquiry into the Catholic Church's handling of the allegations involving Father Fleming - including its acceptance of him despite knowing of some of the allegations prior to his ordination in 1995.

Archbishop Wilson commissioned the inquiry last year after the Sunday Mail revealed Father Fleming was the subject of complaints by two females and a male, identified as Jane, Jenny and Richard. Jane's complaint resulted in a police investigation, but no charges were laid and the file remains open.

The Sunday Mail also revealed Father Fleming was appointed president of Sydney's Campion College in 2005 - despite the college and the Catholic Church being aware of allegations surrounding him.

While the Abbott inquiry has concluded, the allegations involving Father Fleming are still the subject of an Anglican Church professional standards investigation. However, it can take no action because it also has no jurisdiction over Father Fleming.

Mr Abbott's report, meanwhile, confirmed the archdiocese was aware of some of the allegations involving Father Fleming prior to his ordination and investigated them and found the church was not responsible for his appointment to Campion.

Mr Abbott also found there were shortcomings in the church's response to the allegations, particularly its processes prior to introducing its Towards Healing initiative in 1996.

These included no formal register of complaints, which led to evidence being lost, insufficient understanding of the disciplinary measures available, and an informal and insufficient method of investigating complaints.

Jenny said she was upset the church continued to employ Father Fleming considering Campion College had sacked him after becoming aware of the allegations.

"I don't understand. They ordained him even though they knew of the allegations and yet they are not prepared to admit they did the wrong thing or take responsibility,'' she said.

Jane said she disagreed with Archbishop Wilson's claim the response to her was appropriate because in one instance he did not respond to a lengthy email from her in 2006.

"Contrary to what Archbishop Wilson maintains, I have never in nine long years since I first reported the abuse been consulted about the response I wanted,'' she said.

"Archbishop Wilson knew about all three complainants when Fleming was appointed to Campion, and he tells me in a personal letter that there have been `sufficient restrictions' on Fleming to ensure no abuse of power could occur, but how could he have orchestrated this with Fleming in an independent setting?''

Richard said in co-operating with the inquiry he was looking for someone "to accept some level of responsibility and say 'I am sorry', but this had not occurred.