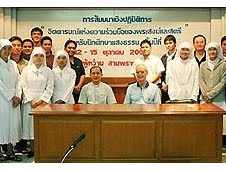 Former Thai Catholic Commission for Women chaplain, Sr Kanlaya Trisopha, has told a gathering of final year seminarians that some priests are accused of high-handed, disrespectful and inappropriate behaviour to nuns.

Sr Kanlaya was speaking on the issue at a seminar and workshop for about 20 final-year seminarians and nuns after a report revealed simmering tensions between the two groups, UCA News reports.

The event, held in Ban Phu Wan pastoral training center in Sam Phran, west of Bangkok, aimed at helping participants avoid such tensions in the future.

Referring to a report on the matter during the Oct. 12-15 meeting, Sr Kanlaya highlighted a case “where a priest, who had a problem with a nun, brought up the issue in his homily and wrote about it in the weekly newsletter.”

“Even though the priest didn’t name the nun, the nun knew he was referring to her and she didn’t have the chance to respond.”

Sr Kanlaya told the seminar that the behavior of clergy sometimes raised eyebrows among the laity, citing a case involving a nun and a priest who worked together daily. “Instead of going home, the priest would take the nun to a recreational spot for dinner and only return to his church late at night. This was questioned by laypeople,” Sister Kanlaya said.

She said another source of tension came from the way instructions were sometimes given. Her report reveals that some priests do not discuss instructions with nuns and other women co-workers, simply handing them written orders.

“From a woman’s perspective, this shows disrespect, while men don’t see it as an issue,” Sister Kanlaya said.

Fr Chaiyo Kitsakul, rector of Saeng Tham College, the national major seminary in Sam Phran, told participants, “There have been problems between priests and nuns because men and women see things from different perspectives.”

Priests often use their status, consciously or unconsciously, to dominate others, he said. He called on the seminarians to “listen to others, especially women and nuns.”