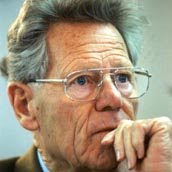 Dissident theologian Father Hans Kung criticized Pope Benedict XVI for his recent opening to discontented Anglicans, charging the pope was "fishing" for the most conservative Christians to the detriment of the larger church.

Father Kung said the invitation to traditionalist Anglicans to join the Roman Catholic Church went against years of ecumenical work on the part of both churches, calling it instead "a nonecumenical piracy of priests."

The pope's basic message is: "Traditionalists of all churches, unite under the dome of St. Peter's!" Father Kung wrote in an editorial Oct. 28 in the Rome daily La Repubblica.

"Look: The fisherman is fishing above all on the 'right' side of the lake. But the water is muddy," he said.

The Vatican announced Oct. 20 that the pope was establishing a new structure to welcome Anglicans who want to be in full communion with the Roman Catholic Church while maintaining some of their spiritual and liturgical traditions.

While emphasizing the importance of celibacy for priests, the Vatican said a dispensation would be made for former Anglican priests who are married to be ordained Catholic priests. However, they will not be able to become bishops.

Father Kung, a Swiss theologian who has taught in Germany for decades, warned that married newcomers will cause resentment on the part of celibate Catholic clergy.

In 1979 the Vatican withdrew permission for him to teach as a Catholic theologian, although it did not restrict his ministry as a Catholic priest.

In the editorial, Father Kung also lambasted Pope Benedict's recent efforts to bring back into the fold members of the Society of St. Pius X, a group of breakaway Catholics opposed to the changes in the church following the Second Vatican Council.

"After reintegrating the anti-reformist Society of St. Pius X, now Benedict XVI wants to flesh out the thinning ranks of Roman Catholics with like-minded Anglicans," Father Kung wrote in the editorial.