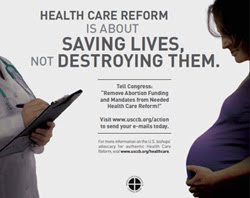 After attempting to persuade lawmakers to listen to Catholic concerns about health care reform, the United States Conference of Catholic Bishops (USCCB) has initiated a grassroots campaign to mobilize the faithful across the country.

The effort includes bulletin inserts, pulpit announcements, web-based ads and an appeal for bishops to personally contact legislators who serve in their diocese.

In order to ensure that abortion is not funded with federal dollars, consciences are protected and that health care is affordable for all, the USCCB leaders asked every bishop to personally take action and lend their support.

The official memo sent out to every U.S. bishop includes a bulletin insert, a flier, a prayer petition and suggested pulpit announcements.

In addition, every bishop was asked to personally mail, email and speak with those lawmakers who serve in their diocese.

The letter to the bishops also requests that they have every parish in their diocese insert or hand-stuff the USCCB Bulletin Insert on Health Care Reform "as soon as possible," since voting on the current health care measures is likely to take place in November.

Catholic bishops have been calling for health care reform for years, the letter notes. Saying that “Catholic moral tradition teaches that health care is a basic human right, essential to protecting human life and dignity,” the bishops cite the numerous Catholic emergency rooms, shelters, clinics, and charities that “pick up the pieces of a failing health care system.”

Though health care reform is desperately needed, the U.S. bishops’ conference has concluded that all committee approved bills are seriously deficient on the issues of abortion and conscience, and do not provide adequate access to health care for immigrants and the poor.

If these issues go unaddressed, the bishops have pledged to vigorously oppose the current reforms.

Despite presidential and congressional assurances that abortions will not be funded by taxpayer money in the proposed health care reform bills, none of the proposed bills have such restrictions.

The Capps amendment is worded in such a way that money to fund abortions is shuffled around so that it merely appears not to do so.

The USCCB bulletin insert asks that Catholics contact the Senate and request that they listen to Catholics' concerns.

“During floor debate on the health care reform bill, please support an amendment to incorporate longstanding policies against abortion funding and in favor of conscience rights. If these serious concerns are not addressed, the final bill should be opposed,” the insert says.

A similarly worded message for members of the House of Representatives suggests that each representative be encouraged to “support the Stupak Amendment that addresses essential pro-life concerns on abortion funding and conscience rights in the health care reform bill. Help ensure that the Rule for the bill allows a vote on this amendment.”

The Stupak amendment attempts to apply the wording of the Hyde Amendment, which has kept federal funding from going to abortions, as well as provided conscience protections to health care professionals.

The USCCB has also released a banner ad which can be posted to individual websites to encourage visitors to take action and support health care reform that respects life.

Grass roots effort, straight from the top. I recall Leonard Wibberley's words in "The Mouse that Roared", Any YEA can be turned into Nay and vice versa if a sufficient amount of verbiage is applied."