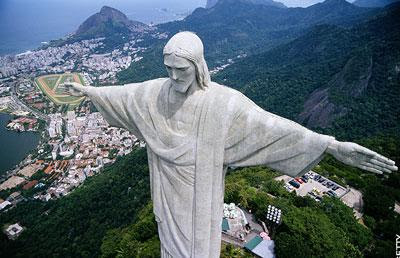 The Catholic Church announced plans to raise 3.5 million dollars for a major upgrade of Christ the Redeemer, the iconic giant statue of Jesus with outstretched arms that overlooks Rio de Janeiro.

Some of the money will be raised by selling small metal brooches of the statue, available for 4.30 dollars at any of Rio's 252 parishes, Tempesta said.

"It is a way to get to know Christ even better," said Tempesta. "We will carry him on our chest."

Brazilian mining giant Vale will also pay for part of the project.

The 30-meter (98-foot) tall stone and cement Christ the Redeemer stands on an eight-meter high pedestal on top of Mount Corcovado, overlooking the metropolis of around 10 million people.

It was designed by Brazilian engineer Heitor da Silva Costa, who ceded all the rights to the monument to the Catholic Church.

A French sculptor of Polish origin, Paul Landowski, sculpted the statue. It was inaugurated in 1931 after five years of work.

Unbelieveble and utterly sad. Brazil has an appalling child poverty problem. Truly Holy Mother has lost the plot. What does Jesus teach? Idolatry or feeding the poor? As for being near to Jesus because you wear a graven image? Dear Lord.. have mercy. And think what that sum could do for the needy - and indeed it could clear that debt of the Chuch here in Dublin without taking money from recession hit parishioners.