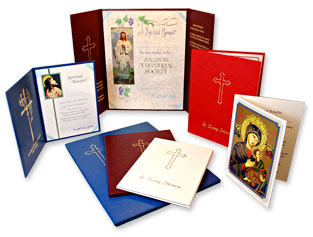 A PRODUCER and a distributor of Mass cards have begun a legal challenge to a new law that restricts sales unless there is an arrangement with the Catholic Church.

Card producer Thomas McNally and his sister Marie Reilly, who sells cards, have taken a constitutional challenge in the High Court against the State over the the Charities Act, which became law in September.

The act outlaws sales of Mass cards other than by agreement with a bishop or provincial of an order of priests of the Catholic Church.

They claim the act is unconstitutional and unlawfully confers a monopoly on the sale of Mass cards to clerics of the Catholic Church or to persons approved by them.

A breach of the new restriction could lead to a 10-year jail term or a fine of up to €300,000. The State is opposing the application.

Mr McNally, head of Mass card producer MCC in New Street, Longford, had an arrangement with several priests who agreed he could affix their signatures to Mass cards in return for a fee.