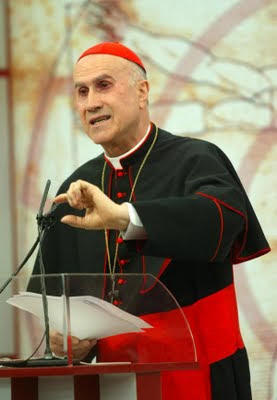 On the contrary, the German pontiff has demonstrated his commitment to the council during his more than four years as pope, Cardinal Bertone told the Vatican newspaper, L'Osservatore Romano, in an interview published Aug. 27.

In the wake of recent reports about a planned move to reverse liturgical changes made since Vatican II, Cardinal Bertone said reporters and observers should stick to the actual actions undertaken by the pope since his election.

"The other ruminations and whispers about presumed documents of reversal are pure invention, following a standard and stubbornly re-proposed formula," he said.

A week earlier, an Italian newspaper reported that the Vatican's worship congregation had given the pope a document with proposed liturgical modifications, including a curb on the practice of receiving Communion in the hand. A Vatican spokesman later said that, at present, there were "no institutional proposals for a modification of the liturgical books."

Cardinal Bertone pointed to several areas in which he said Pope Benedict had promoted the teaching of Vatican II "with intelligence and depth of thought," including relations with Eastern and Orthodox churches and dialogue with Judaism and Islam.

He said the pope has also favored an increasingly direct and fraternal relationship with the world's bishops, as evidenced during their "ad limina" visits to the Vatican and in the freer discussions during synods of bishops.

Likewise, the cardinal said, the pope has had more direct contact with top Roman Curia officials and has restored the practice of regular meetings with them.

Cardinal Bertone said the pope does have a plan for "reform of the church," but it's one that focuses on personal holiness and fundamental questions of faith. In a similar way, the pope's messages to the wider world have made it clear that his main priority is to restore a sense of awareness of God in the world and in society, he said.
+++++++++++++++++++++++++++++++++++++++++++++
Disclaimer

Milord doth protest too much.

If the big guns are denying the fears, then the fears must be true.

After all, this IS the Vatican speaking.