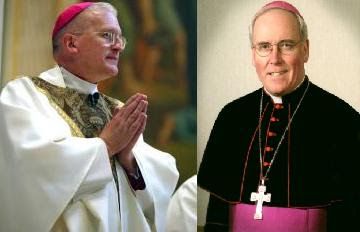 Scranton Bishop Joseph F. Martino is moving from his downtown residence to the diocese's former seminary in Dalton while Portland, Maine Bishop Richard Malone is under fire over his million dollar official residence.

On Wednesday morning, a pickup truck packed with a desk and easy chairs was parked in front of the bishop's residence, the Times-Tribune reports.

Workers said they were relocating some of the bishop's belongings to Dalton in advance of a complete move, and the bishop will remain downtown "for a while yet."

The former St Pius X Seminary where Bishop Martino will make his new home was closed in 2004 because of a shortage of men seeking priestly vocations, the paper says.

The campus continues to be the site of the diocese's Fatima Renewal Center, which is regularly used as an education facility for teachers and catechists and a retreat for the diocese's laity and youth.

According to the Times Leader, the move may be linked to rumors of a big change coming in the diocese of Scranton - including possible reshuffling at the top.

"This past week I've been on the telephone trying to confirm reports in Washington, Philadelphia and Scranton about impending changes within the diocese," Tom Roberts wrote in a blog for the National Catholic Reporter.

Rumors that Martino will soon be leaving the diocese have grown frequent and specific, down to dates and even times the announcement would be made. Such detailed predictions have been consistently wrong.

Portland, Maine Catholic Paul Kendrick hs this week sent off a mass-distribution e-mail this week querying Bishop Richard Malone's million dollar official residence after hearing that five churches will close this year and next because of shrinking congregations, growing costs to maintain the buildings and the need to protect religious programs and services from ever-increasing parish deficits.

"It's not about Richard Malone," said Paul Kendrick told the Morning Sentinel. "It's about 'What kind of church is this?'"

"Bishop Malone wants Maine's Catholics to cut costs, spend less and do without," observed Kendrick. "Everyone, that is, but him."

How about the new residence of the English Benedictine Nuns at 4 1/2 million sterling.. an Order which is dying out - and which is Vowed to Holy Poverty. An obscenity.