Cardinal opens his mouth and puts his carbon footprint in it 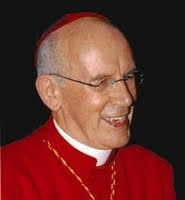 THERE are some businesses which, thankfully, are proving resistant to the recession.

Less thankfully, religion is one of them.

Whether it's the uncertainty of the times which is making people turn back to the comforts of the Almighty, or a genuine spiritual yearning for something better after the era of untrammelled greed which the commentators insist we've all been living through, remains to be seen.

Maybe once wages and house prices start rising again, God will be relegated to His usual place on the back burner. But for now, the Church is bouncing back. A total of 38 young men entered the seminaries this year, almost double last year's figure.

It's too early to say if it's a trend, insists an uncharacteristically modest Catholic Communications Office; but coming only a few months after the Church suffered its own version of the credit crunch -- more of a credibility crunch, really -- with the publication of the Ryan Report into institutional abuse, it's a remarkable change of fortune.

If only the Catholic Church realised when it was on to a good thing, and didn't push its luck.

Given all that's happened, you'd think the hierarchy would say to one another: "Phew, lads, that was a close shave. Now let's keep our heads down for a while till it all blows over." Instead they immediately dive head first into yet another row -- thanks to Cardinal Sean Brady's homily last weekend in Limerick.

It all started out innocuously enough, this time as a sermon on climate change. Priests feel the need periodically to do this Save the Planet schtick. It's embarrassing in a Kum Ba Yah sort of way, and, if left unchecked, has been known to lead to the nightmare of acoustic guitar playing on the altar, but probably harmless enough.

The problem was what followed after Cardinal Brady had finished with the usual guff about how churches should measure their carbon footprints and offset the damage by helping baby polar bears to swim or something.

Tangential doesn't even begin to describe the directions which one of Ireland's premier churchmen took from his original starting point. Anybody who nodded off in St John's Cathedral last weekend would have woken up to find that gay marriage was in the firing line, leaving them perhaps with the disorienting impression that homosexuals were responsible for global warming. His Eminence didn't stop there either.

He might as well have called his homily "And Another Thing..." as he strayed far from carbon footprints to touch on such topics as the right to life, to the right to a "natural death", through to research on embryonic stem cells. Meddling with the integrity of the human body and meddling with the environment were, in this light, both aspects of the same disorder.

To be fair, none of this was exactly new ground for Catholic prelates, who have traditionally not been big fans of reproductive interference, Indeed, large chunks of the text were lifted wholesale from the Pope's recent encyclical, Caritas in Veritate.

Plenty of what he had to say was also right on the money. Marriage and the raising of children in a loving two-parent environment as the cornerstone of a stable society? Nobody's quarrelling there, not least the vast majority of people who already live in precisely that way -- though the warning does invite a sarcastic response about what exactly the Church was doing to protect family life when it let its priests get away with molesting children.

More than that, though, it was the faint undertone of menace which stuck in the craw. Cardinal Brady's homily was addressed not to his small audience of listeners in the cathedral that evening, so much as over their heads towards the politicians in Dail Eireann who have to make a decision on legalising civil partnerships for gay people, allowing them to avail of the same legal rights and protections as heterosexual married couples. This was against the Constitution, Brady claimed. It was against the common good, he added.

Then the killer blow: those who supported the legislation, the Cardinal stated, would be making a choice to "depart" from God. That's a heck of a sword to dangle on a thread over your opponents' heads. Hilariously, Sean Brady then went on to insist that freedom of conscience must be respected.

So you respect your opponents' right to disagree, but if they do disagree, then they're to be denounced as having turned their backs on God Himself?

That's a strange kind of respect, to say that anybody whose understanding of their faith leads them to sincerely espouse a different view is to be banished from the tent and ejected into some kind of godless wilderness. God's not big enough to make room for people who think gay couples should have legal rights? Impertinent as it may sound to chastise a cardinal on matters of theology, I really hope God would beg to differ on that one, especially since the alternative for Him is spending eternity with a tiny group of smug, self-satisfied know-it-alls who think their particular ideologies make them the chosen ones.

No chance of merging shades of grey in the middle then? No space for honest disagreement among fellow Christians?

Basically, what he seemed to be saying is that anyone who differed from his interpretation of Christian teaching wasn't a proper Christian at all. And the last person I heard talk like that was the Reverend Ian Paisley. Some role model.

It's surely this arrogant air of proprietory rights regarding God's mind which Fr Aidan Troy, formerly of North Belfast's sectarian interface, now transferred to Paris, was referring to in a recent interview when he spoke of how the Catholic Church had thought simply saying sorry for the decades-long abuse scandal was sufficient, without facing up to the need to change its way.

Fat chance of that happening, as he well knows.