Secular songs to be banned at cathedral ceremonies 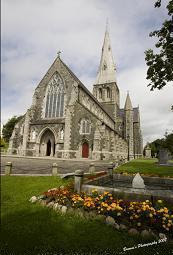 Songs that are not religious in nature will no longer be allowed at ceremonies in St. Aidan’s Cathedral in Enniscorthy.

The cathedral’s authorities, who are concerned at an increase in the use of such songs, in particular during wedding and funeral liturgies, have told parishioners that pop music and folk songs will no longer permitted.

The authorities feel that although pop or folk songs involved may well be beautiful, they do not respect the sacred character of the liturgy.

Curate Fr. Richard Lawless said he and his colleagues were very mindful in particular that newly-bereaved people were going through a difficult time and would be ‘diplomatic and not dogmatic’ in dealing with requests for the use of various songs.

He said the priest involved would explain why a church was, or was not, an appropriate setting for certain music.

“The primary role of a priest is pastoral care, but in the event of a family pointing out the importance of a certain piece of music, that they say must be used for a ceremony, we will look at facilitating and accommodating the request,” he told the congregation.

“We are really asking people to respect the sacredness of the building and also the occasion,” he added.

Fr Lawless said certain songs could be used, if so wished, in a funeral home or in a cemetery when the prayers and the Christian part of a funeral service are over. It was the wish of the parish not to upset or offend parishioners in the matter, he went on.

Fr Lawless pointed out that St Aidan’s parish had a beautiful liturgical tradition and was currently served by four choirs and several solo performers.