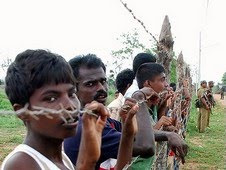 Sri Lankan government officials say that nearly 600 Hindu and Catholic priests who were held in internment camps in the country’s north have been freed.

The clergy were allowed to leave the camps in the northern district of Vavuniya, where 300,000 inmates are detained under tight security to be screened for remaining Tamil Tiger rebels, Lanka Business reports.

“We are taking measures to free the remaining members of the clergy at the earliest,” said P.S. Charles, the senior civil servant in the area.

A total of 571 Hindu priests, six Catholic priests and two nuns were allowed out, she said, adding another 220 were still in the camps.

International and local rights groups have expressed concern about the welfare of the civilians held in the cramped internment centres, which are officially described as “welfare villages.”

THEY ARE idp CAMPS. NOT INTERNMENT CAMPS!
AND SEWERAGE SYSTEMS WENT WRONG BECAUSE THE AID GROUP MADE THEM INCOMPLETELY, SO AS TO PRESSURE THE GOVERNMENT TO RESETTLE THE IDPS.
KIND-OF LIKE BLACKMAILING.

how many IDP camps have barbed wire fences keeping the people in? apparently this INTERNMENT camp