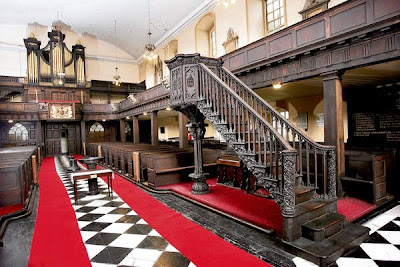 AN APPEAL for funds has been made to help restore one of Dublin’s finest Georgian churches which has fallen into a state of disrepair.

Dean of Christ Church Cathedral the Very Rev Derek Dunne says it is “almost too late” for St Werburgh’s Church, where Lord Edward Fitzgerald is buried and in which writer and cleric Jonathan Swift was baptised.

The Anglican church, close to Dublin Castle in the city centre, was built in the 12th century.

But the existing structure dates from 1719.

It was one of the royal chapels before the Act of Union and was the parish church of the British Lord Lieutenant.

Its facade, which fronts on to Werburgh Street, was designed by Thomas Burgh, surveyor general of Dublin.

A side entrance into the church reveals its 250-year-old interior, designed by architect Joseph Jarratt. It features wooden galleries on three sides, supported by Doric pillars. The centre aisle still has its original black and white tiles, now cracked and pitted.

Paintwork on the plain, curved ceiling is cracked and peeling. Plasterwork on the walls is crumbling.

And a heavenly-blue sky with gold stars painted above the fine altar has cracked and begun to flake away.

Stucco detail above the altar is also in need of repair, as is the church’s organ at the far end of the building. It dates from 1767 and was built by Henry Millar.

The Lord Lieutenant’s viceregal pew is set before the organ and marked out on either side by brass rods topped with brass and red velvet crowns.

The church also features a beautifully detailed wooden pulpit, thought to be carved in 1807 by Richard Stewart.

An odour of damp pervades the church and the crypt below. The latter is reached from outside the building by steep stone steps. It is replete with disintegrating coffins and the remains of the dead.

Only one coffin remains intact, that of Lord Edward Fitzgerald, head of the United Irishmen, and it has been renewed at least three times.

The church’s graveyard is in the back garden of a nearby house and a picnic table and umbrella sit among the ancient slabs.

Dean Dunne says the population of the parish is very small and cannot fund the extensive repairs needed. The building needs a new roof, repointing, guttering and damp-proofing. The interior requires restoration and rewiring. “It has been neglected for decades,” he says.

At present, the building is locked most of the time, being used once or twice a month for 40 minutes by its tiny congregation.

With its history and wonderful acoustics, the church could be opened as a heritage building and a venue for music. And while there have been discussions with the Office of Public Works along those lines, nothing has come of them.