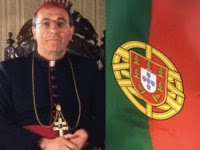 The president of the Portuguese Bishops’ Conference, Archbishop Jorge Ferreira da Costa Ortiga, said this week, “Civil unions can be legalized if that’s what is wanted, but they cannot be made equivalent to marriage. This problem must be dealt with more slowly and with the involvement of society,” he said.

L’Osservatore Romano reported that the archbishop told Renascenca Radio about the opinion of the Portuguese bishops on a decree modifying the country’s law on civil unions, a decree that President Anibal Cavaco Silva has decided not to promulgate.

The archbishop said the new law on civil unions, which would include homosexual unions, is “inappropriate and hasty” and needs to be debated more widely by all citizens. “This rush is not the best path to take,” he said.

“I am totally in agreement with president about the fact that it should be taken up later and that the Portuguese society should be involved,” the archbishop said.

Several days ago the president said making marriage and civil unions equivalent “could turn into a limitation of citizens’ freedom of choice.”

He said there had not been enough debate on the measure, which could lead to “huge consequences for the lives of thousands of Portuguese citizens.”