Vatican seeks ‘reform of the reform’ 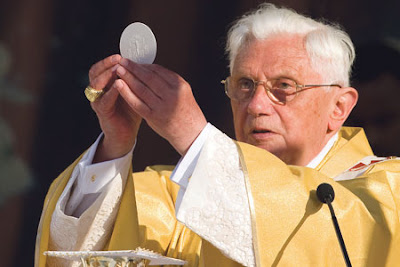 The Vatican has proposed sweeping reforms to the way Mass is celebrated, it has been claimed.

Communion on the tongue, Consecration celebrated ad orientem (facing east) and renewed use of Latin could all be re-introduced to ordinary Sunday Masses as part of proposals put forward by the Congregation for Divine Worship.

Andrea Tornielli, a senior Vatican watcher, reported last week that the congregation's cardinals and bishops voted "almost unanimously in favour of greater sacrality of the Rite" at a plenary meeting in March.

Members of the congregation are said to have put forward 30 propositiones ("propositions") aimed at reforming the way in which the Novus Ordo has been celebrated since the Second Vatican Council.

These set out to recover a "sense of Eucharistic worship", the use of the "Latin language in the celebration" and include the "remaking of the introductory parts of the Missal in order to put a stop to liturgical abuses".

According to Mr Tornielli the propositions, which were voted on by the congregation on March 21, also include placing renewed emphasis on receiving Communion on the tongue "according to the norms".

Mr Tornielli said that Cardinal Antonio Cañizares Llovera, the prefect for the Congregation for Divine Worship, had also been studying ways to return to the ad orientem celebration of the Mass. This would see the priest and the congregation facing the cross and the altar during the Consecration.

He also said that the "propositiones foresee a return to the sense of sacredness and to adoration, but also a recovery of the celebrations in Latin in the dioceses, at least in the main solemnities, as well as the publication of bilingual Missals - a request made at his time by Paul VI - with the Latin text first".

Mr Tornielli said these were the first concrete steps towards the "reform of the reform", a notion outlined in Pope Benedict's 2000 book, The Spirit of the Liturgy. The book argues that some of the liturgical reforms following the Second Vatican Council got out of hand and needed reform as they no longer reflected the changes envisaged by the Council Fathers.

Cardinal Cañizares delivered the propositiones to Pope Benedict on April 4, receiving the Pope's approval, Mr Tornielli said. But Mr Tornielli also said that the "reform of the reform" would take a long time before it would be fully implemented. He said it would require a long and patient labour "from below" with the aid of the bishops.

"The point of departure and ultimately also that of arrival is the Council's Constitution on the liturgy Sacrosanctum Concilium," he said.

"The Pope is convinced that it serves nothing to make hasty steps or to drop directives from on high, with the risk then that it could remain a dead letter. The style of Ratzinger is one of comparison and, above all, of example. This is evidenced in the fact that for a year now anyone who receives Communion from the Pope must kneel on a kneeler prepared for that purpose by the master of ceremonies."

Shawn Tribe, the editor and founder of the New Liturgical Movement, an online magazine which deals with liturgy, said: "Given what we know from the Pope's writing and discourses over the years, one can at least say that what is being suggested would be consonant with the Pope's own liturgical thought and approach.

"Evidently we can only speculate at this point and will have to wait and see what, if anything, might actually come to pass, though Tornielli has proven himself reliable in these regards in the past. If what has been reported does indeed come to pass, it would certainly be a matter of no little significance."

Fr Ciro Benedettini, the deputy spokesman for the Holy See, downplayed the report on Monday. He said: "At the moment, there are no institutional proposals in existence regarding a modification of the liturgical books currently in use."

But Mr Tornielli stood by his story, saying that he interpreted Fr Benedettini's denial of "institutional proposals" as indicative of "unofficial (for now) projects".

The American Catholic News Service (CNS) quoted anonymous Vatican sources as denying that proposals had been voted on at the plenary meeting. Rather, the congregation had forwarded its suggestions on the subject of Eucharistic Adoration - which had been the theme of the plenary session - to the Pope. The subject of ad orientem had never been discussed, according to the CNS source.

The Second Vatican Council's Constitution on the Sacred Liturgy, Sacrosanctum Concilium, said that Latin should remain the language of the liturgy even as it promoted the wider use of the vernacular.

It said that "the use of the Latin language is to be preserved in the Latin rites" but also that "since the use of the mother tongue, whether in the Mass, the administration of the sacraments, or other parts of the liturgy, frequently may be of great advantage to the people, the limits of its employment may be extended".

Communion on the tongue continues to be the liturgical norm, while reception on the hand remains an indult granted on a local level. Archbishop Malcolm Ranjith, then secretary of the worship congregation, caused a stir last year when he said that Communion should be received on the tongue.

Archbishop Ranjith argued that the practice had been brought in hastily in some places and was only approved by the Vatican after it had been introduced.