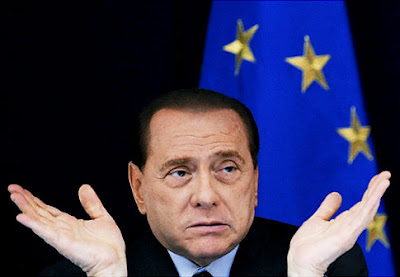 Relations between Italy's government and the powerful Catholic Church soured on Friday after a newspaper owned by Prime Minister Silvio Berlusconi's family ran a scathing report on a top Catholic.

Berlusconi, whose private life has come under media scrutiny and Church criticism, abruptly canceled a visit to the central Italian city of L'Aquila, where he was to have attended an annual religious ceremony for the forgiveness of sins.

A dinner that was to have been attended by Berlusconi and Vatican Secretary of State Cardinal Tarcisio Bertone, second only to the pope in the Vatican hierarchy, was also suddenly called off only hours before, despite weeks of planning.

The Vatican's official reason was to give the money that would have been spent on the dinner to victims of the earthquake that hit L'Aquila in April. But Church sources said this was a diplomatic excuse and the real reason was Vatican anger.

The rapid sequence of events began when Il Giornale, a national newspaper owned by Berlusconi's brother Paolo, ran a banner front-page headline against Dino Boffo, editor of Avvenire, the daily newspaper of the Italian Bishops Conference.

Il Giornale said Boffo, whose paper has been very critical of Berlusconi's private life, had accepted a plea bargain in a court in 2002 after he was accused of harassing a woman. The paper said Boffo had a homosexual relationship with her husband.

Il Giornale regularly attacks Berlusconi's critics but rarely if ever targets the Church.

It called Boffo, one of the most influential Catholic opinion makers, a hypocritical "supermoralist" who should not criticize Berlusconi's lifestyle when it said he has sexual skeletons in his own closet.

One Church source said Vatican officials "went ballistic" when they saw the Il Giornale report and ordered the bishop of L'Aquila to cancel the dinner Berlusconi was to have attended.

"I can't remember a darker day in relations between this government and the Church," the source said.

In a statement, Boffo, whose editorials reflect the views of the Catholic Church and often the Vatican, called the attack on him "absurd." He said he was not the perpetrator but the victim of what he said was "telephone harassment" in the 2002 case.

The Italian Bishops Conference, which owns Avvenire, issued a statement fully backing Boffo and his work at the newspaper.

Late on Friday afternoon, Berlusconi issued a statement "disassociating" himself from the article in his brother's newspaper, saying respect for private lives should be "sacred."

Berlusconi is going through a messy divorce from his wife Veronica Lario, who in a new book says wants out because she can no longer stop him from "looking ridiculous before the world."

He has been at the center of media attention in Italy and abroad over the nature of his relationship with an aspiring model whose 18th birthday party he attended in April. He has denied that anything "spicy" happened between them.

The Italian media has also been agog over allegations that Berlusconi spent the night with call-girl Patrizia D'Addario in his Rome residence in November. He has never denied sleeping with D'Addario, saying has was "no saint," but says he never paid for sex in his life.