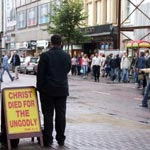 A 29-year-old street preacher has been released on bail following an arrest in Maidstone, Kent

The arrest came after an initial warning by Manchester Police at the end of July. Miguel Hayworth was approached by Police Officers in St Anne's square, Manchester, where he was threatened with an arrest and a warning that reading portions of scripture in public could be classed as an offence under Section 5 of the Public Order Act.

The Police issued the warning when they received a complaint about his conduct being offensive and inciting racial and religious hatred.

Onn Sein Kon, Mr Hayworth's case worker from the Christian Legal Centre said: "The police did not pursue this line when they issued the warning, so an investigation is being made into the nature of the offence."

Mr Miguel read from Romans 1 to 6, which deals with sexual orientation. Mr Kon said this case is similar to that of Pastor Harry Hammond, who held anti-homosexuality placards in Bournemouth Square whilst reciting from the book of Revelation, and was later issued with a public order offence.

Mr Hayworth was arrested on Monday morning for preaching from the same part of the Bible. "Romans 1 to 6 is his normal modus operandi,” said Mr Kon, "but under the Human Rights Act, why should this be an offence at all?"

Andy Banton, General Secretary of the Open Air Mission, said: "We got legal advice on this two years ago so preachers know their responsibilities before the law and their rights and as far as that is concerned, we're free to preach the Christian message. The difficulty is that the legislation is very grey and open to interpretation, which invites mischief-makers.

“In the past, people have run with false accusations against street preachers because of disagreements with what they have to say. For some, the Bible is incompatible with their modern lifestyle. A person who goes into a court of law swears an oath on the Bible, so for people to be arrested for quoting it seems ludicrous.”

In an extract from a letter stipulating the rights of Preachers, Ormerods Solicitors note that freedom of speech "includes not only the inoffensive but the irritating, the contentious, the eccentric, the heretical, the unwelcome and the provocative, provided it does not tend to provoke violence.

“Freedom only to speak inoffensively is not worth having."