The Kremlin vs. the Cardinals 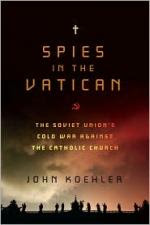 It has been a tough year for former Soviet spies.

The most recent volume by researchers Harvey Klehr and John Earl Haynes solved many of the remaining mysteries surrounding Soviet spy networks in early Cold War America, while an upcoming book on Soviet espionage by Cambridge historian Christopher Andrew promises to reveal "the identities of previously unknown enemies of the United Kingdom."

An indispensable addition to this long overdue hit parade is Spies in the Vatican, an intriguing account of the KGB's secret war against the Catholic Church.

Author John Koehler is uniquely suited to tell the story having served as both a US intelligence officer and an AP journalist in Europe.

Upon leaving the media, Koehler spent the better part of the last decade delving into volumes of dusty Cold War-era intelligence documents. His dedication is apparent: Spies tells a fascinating alternate history of the final two decades of the Cold War as written by tyranny's custodians.
Koehler abruptly begins the story in the Chekist dungeons of the early 1920s as a gleeful Chairman Lenin oversaw the mass murder of thousands of clerics.

The decades of atrocities that followed drive home the central theme of Spies: beginning at its inception, the Soviet government was willing to use all available tools to counter religion's influence.

Overseeing this effort, Stalin's successors relied less on brute force and more on the panoply of covert tools wielded so ruthlessly by the KGB and its sister services in East Germany and Poland.

Especially wary of the curia's influence in the Soviet sphere, Moscow's spymasters relentlessly pushed their field officers to target church institutions for subversion. As Koehler deftly recounts using actual Communist source reports, the result was startling: Soviet leaders enjoyed regular access to the inner deliberations of Vatican leaders for years, secured by the work of several spy networks.
Access to internal Vatican politics was only one of the benefits derived from infiltration. The Vatican's role as a forum for policy discussions granted Communist intelligence chiefs' victory after victory as American and European leaders bared sensitive diplomatic strategies before the Holy See.

The word for word account of the meeting was soon placed on the desk of Leonid Brezhnev.

The book's simple title, however, somewhat belies the fact that although Communist intelligence services worked tirelessly to embed sources within the Vatican leadership in Rome, their greatest successes were enjoyed home.

The KGB, the East German Stasi, the Polish SB and other Eastern Bloc services collaborated to infiltrate bishoprics and dioceses throughout Eastern Europe and ran hundreds of church--affiliated sources.

The campaign escalated in 1978 with the elevation of the energetic Polish cardinal Karol Wojtyła.

Already concerned over political tumult in Poland, Soviet leaders authorized the KGB to: Use all possibilities available to the Soviet Union to prevent the new course of policies initiated by the Polish pope; if necessary with additional measures beyond disinformation and discreditation."
Was this a tacit go-ahead for an assassination attempt? Koehler argues as much, although he admits the mystery of the failed 1981 assassination attempt will likely never be fully resolved.

What is certain is that many of the Pope's movements and statements were subsequently betrayed by an army of informants.

The inspiring story of John Paul II's 1979 trip to a seething Warsaw takes on a more sinister air as Koehler weaves together the hundreds of informant reports that kept Soviet leaders informed of the Pope's every utterance.

Who were these informants?

Koehler does not expend many words detailing their motivations, but we do learn they were a diverse lot including a Polish Bishop codenamed IGNACY, a German monsignor (PAUL), and a monk from Aachen (LICHTBLICK). Others included local priests and Catholic journalists.

Most of the former informants suffered little more than stunted careers following communism's collapse in return for their perfidy, generous fates for men who had sold their coreligionists to the wolves. Koehler personally confronts several of them; the aged traitors usually excuse their interactions with secret policemen as involuntary, although records of lavish lunches and generous cash allowances granted to such men by their handlers cast doubt on their alibis.

Despite the extent of their infiltration, Communist intelligence services were ill-equipped to interpret the data flow. Monumental errors, such as one Stasi report that credits "Zionists" with considerable influence over the Church in Poland testify to the level of Eastern Bloc misconceptions.

Koehler suspects a secret Vatican disinformation campaign threw off Moscow's analysts, but ideological rigidity and groupthink appear to be the more likely culprits. Indeed, the inability of Kremlin leaders to understand the incoming information bolsters a core theme of the book: regardless of how extensive Communist penetration was, the grey men in the Kremlin were powerless to respond in a coherent manner.

The book's faults -- lackadaisical editing and a proclivity to add superfluous quotes -- turn a captivating volume into a sometimes tepid read.

Those willing to plough through the rough patches however will be rewarded with a vivid depiction of European Communism's death throes.

In the end, the Kremlin's spy networks only attuned it to the strength of the volcano of public resentment, but offered little guidance on how to suppress it.

SIC: AT
EDITED BY CW Team